Are we Celebrity "Cruise People"? 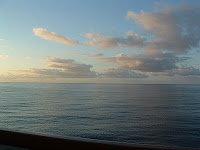 "Are we cruise people?"

And while analyzing our inner-self traveler, Joel, the researcher, has sought out, monitored and researched various cruises . . .just in case we might try it again.

His system: Three P's:
Ports of Call,
Price and,
Problems of getting to and from the departure/arrival ports.

One cruise in particular had caught our eye: a repositioning cruise on Celebrity cruise lines.  A repositioning cruise is one in which the cruise line needs to move a ship from one location -- say the Caribbean to another, like the Mediterranean, for an upcoming season of sailing and wanting to fill it up, offers some great deals.

A few weeks ago we checked it out on our old favorite Cruise Compete, an on-line company that provides quotes from a variety of travel agencies throughout the United States by submitting a single request for pricing.
Seven agencies responded.
Five of the quotes received were for the same cabin category -- on board credit incentives differed slightly -- but the prices differed by more than $200.
One of the highest quotes we got was for a view obstructed balcony! 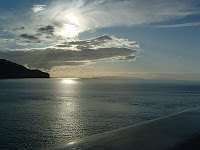 Still, we didn't book anything and continued to ask ourselves,
"Are we cruise people?"

But the scales tipped when an email arrived last week from Travel Zoo with it's summary of 'best travel deals this week' we saw 'our' cruise listed with a lower price for a "Concierge Class" cabin (higher up on the ship and more amenities) than the quotes we'd received for a regular balcony cabin.

We called CruCon Cruise Outlet , the agency offering the cruise, and within 10 minutes had answers to all our questions and had selected our room as the agent told us which cabins were available so we could look at them on our computer while we talked with her. (In contrast, on the HAL cruise, we didn't get our cabin assignment until a few days before sailing - which always causes a bit of wonder about whether you really will get a cabin or if they overbook like airlines.)

Our contract for the Celebrity cruise was emailed within minutes of the phone conversation and a receipt for our deposit arrived yesterday.

Still, because we'd not used this company before, I did a bit of  research. Yes, they are licensed and bonded. Even more comforting was the opening page of their web site. . . it's wall-papered with cruise line awards for sales, professionalism and testimonials from happy customers.

So far this cruise has been a good experience.
We will again ponder whether we are 'cruise people' during those languorous days crossing the Atlantic later this year.
Posted by Jackie and Joel Smith at 8:12 AM