Pacific Ocean to the Black Sea in a Day 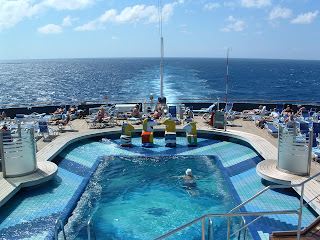 We went from the Pacific Ocean to the Black Sea in a matter of hours; a move so swift for the glacially-researching Smith's that I still can't believe in two months we'll be cruising to destinations in Russia, Ukraine, Turkey and Greece. . .but that's how travel research and planning go sometimes with us.

The Research
For more than a year we've been looking for cruises that would include Sydney, Australia and New Zealand.  Either the ship's routing didn't appeal or the price was prohibitive. Then, some months ago, we began following the price fluxuations of a 30-day cruise from the U.S. West Coast to Sydney, with some Hawaiian and South Sea ports of call thrown in.  It tempted. The cruise price went down; we calculated the cost of the various airfares to get us back to Seattle and to San Francisco . . .we debated. . .'should we or shouldn't we?'. . . and then. . .

The Trip
Two days ago Joel was reading the latest cruise deals from Vacations To Go and he mentioned a 12-night Holland America cruise sailing this fall from Athens, Greece to ports of call that ring the Black Sea.  Price was good and the eight ports of call sounded exotic. We sent the cruise off to Cruise Compete, a website we've used before (and highly recommend) to price-compare this cruise.  We've learned price quotes do vary for the same category cabin on the same cruise.

By 5 p.m. we had booked our trip with Cruise Vacation Outlet, a company in Orlando, Fl, that submitted one of the best quotes we received in response to our Cruise Compete request; one that included a $175 on-board credit.

We'll be getting to Athens using a combination of frequent flier miles (it took some time to find something that didn't involve two plane changes and long waits along the way) and Europe's low-cost airlines.  We will fly Delta from Seattle to Amsterdam for air miles and $97US per person in taxes and fees.  After a couple nights there we'll continue to Athens.

Maybe we'll get to Australia next year. . .
Posted by Jackie and Joel Smith at 9:37 AM