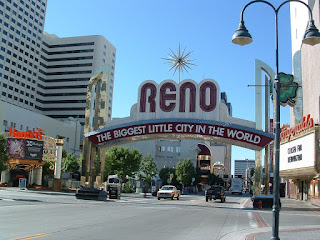 Google Maps and Expedia had nailed it pretty well - it took us just less than their estimated eight hours to travel from Las Vegas to Reno, Nevada. They listed 452 miles, we traveled 465. We also veered off their directions (when do we ever follow set routes?) and took the scenic route north primarily following State Route 95 and its Alternate SR 95.  We followed long stretches of deserted roadway through unseasonably green desert lands.

The route provided us a trip through history thanks to the small towns through which we passed.  Towns such as Goldfield where empty buildings are but a reminder of its glorious goldmining days. It's just down the road 'a piece' from Tonopah, the town I wrote about a few days ago.  Goldfield's 1906 Esmeralda County Courthouse seems to be in the best shape with the old hotel down the road appearing to be poised for renovation. Mining operation near Goldfield/Tonopah
Mina, an old railroad town founded back in 1905, about an hour from Goldfield, seemed to have nothing more open than a single burger joint.  A sign welcomed ATV-ers (that would be all-terrain vehicles) to its more than 500 miles of trails and a subsequent internet search after we got home confirmed it's popularity with outdoor enthusiasts.
A couple hours beyond Mina we passed the Wabuska Bar and Rooms, a wooden building dating back to 1881; then a stop on the East-West Rail line.  The place is for sale according to the internet - hopefully the new owners will retain its historic presence in the middle of the desert.

There were a few brothels along the way as the activity inside them is legal in parts of the state. For more on this topic you'll have to do your own roadtrip or internet research.

The High Plains Drifters crossed elevations some 5,000 - 6,000 feet in height with temperatures at the summits in the 90's - I couldn't help but think of those pioneers who crossed these vast countrysides on horseback and in covered wagons. It was early afternoon when we reached Walker Lake a 12-mile long, 5-mile wide liquid oasis near the town of Hawthorne.  I read an article recently about words to avoid in travel writing.  "Oasis" is such a word. The article's authors claimed their are few true such places - I believe they need to do a road trip in Nevada and they'll change their minds on that word.  RV's and motorhomes were beginning to stake claims to spots along its banks of the 'oasis' as the Fourth of July long weekend approached.

We could have reached Reno sooner and maybe even shaved off some of the miles we logged that day, but the point of the trip had been to see the sights and on this particular day we got our money's worth!
Posted by Jackie and Joel Smith at 7:23 AM