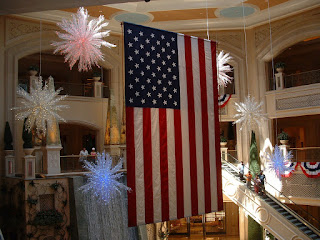 Palazzo, Las Vegas
The "High Plains Drifters", as I named us for this journey, set out to see America's West on this 12-day road trip that took us 2,733.5 miles from start to finish. We twice crossed Washington State, traversed central Oregon and looped our way around Nevada, and nipped off a corner of northeastern California for good measure.  At one point we were next door to Arizona and a stone's throw away from southwestern Utah.

We returned to a cloudy, cold Kirkland with our skin a deeper shade of  tan, our souls refreshed and confident that the old west is alive and well. We are even more assured on this Fourth of July that despite the continuing media headlines of our county's economic woes and the on-going political finger-pointing, that at least in the West, America, too, is alive and well, as evidenced by those flag-waving patriotic people and places we found along the way. 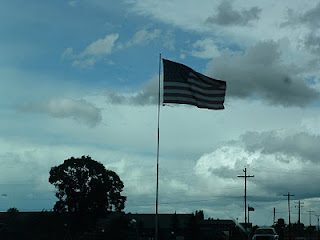 Burns, Oregon
Flags fluttered along our route from Hawthorne, Nevada with its enormous flag flying from a skyscraper-sized flag pole to the flag-lined highway at Pilot Rock, Oregon; from the Old Glory painted windmill blades on a farm outside John Day, Oregon to a campground on the Ukiah-Dale Scenic Biway where individual campsites displayed flags and red, white and blue banners.. .not to mention the dozens of towns, ranches and farms in between, decked out in red, white and blue.

We traveled roadways that at times followed or intersected the same routes as did those thousands of brave pioneers more than a century ago. Those who followed the Oregon Trail, the Noble Emigrant Trail and other routes across Nevada's Great Basins and on through Death Valley or the many mountain passes, like that  made famous by the Donner Party.

All those many folks who are credited with settling  the West were on a red, white and blue road trip of their own design ~in search of their American dreams; ultimately laying the cornerstones for the West that we were happy to find is still alive and well.
Posted by Jackie and Joel Smith at 2:17 PM