On the Extraterrestrial Highway

Day 3:  High Plains Drifters headed out for Mesquite, Nevada where we will spend three nights almost astraddle the Arizona/Nevada border.   Mesquite is about 85 miles outside Las Vegas. And to get there we had another half day of road time ahead of us.

Roads in this part of the country are sparsely traveled, long straight, stretches of highway. Some are far more interesting than others. Such as the one pictured below.  It is S.R. 375, but more commonly known as The Extraterrestrial Highway. 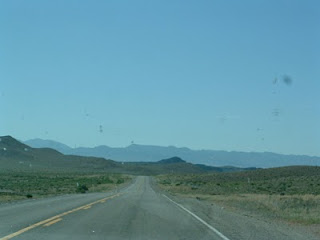 ET Highway
According to the Automobile Club of America it got its name because of its proximity to the Air Force's top-secret Area 51 and, well, because of the many UFO sightings reported from people traveling the road.  An official highway sign, riddled with bullet holes stated we were on The Extraterrestrial Highway (either folks use it for target practice or there were more sightings here than I could have imagined). 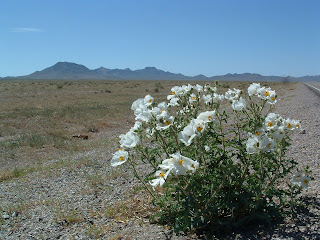 Like other stretches of highway it provided spectacular scenery but nothing to indicate there was any UFO activity. That is until we saw this in the distance: 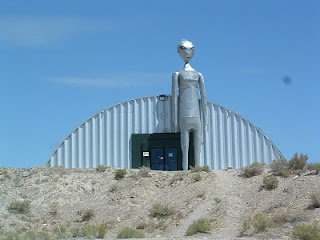 Alien Research Center
When I said I had to take a photo and we turned into the parking lot, we saw the sign "Alien Research Center."   Hummm, no sign of life around it, although the sign says it has a museum and gift shop now open.  I later Googled it so that I could give you a website but found nothing more than an address:  100 Extraterrestrial Highway, Hiko, Nevada, (775)725-3825 and several sites that include it in their listings.

Go ahead, let your imaginations run wild. . .have a laugh. . .and please add a comment if you have information about the Alien Research Center.
Posted by Jackie and Joel Smith at 7:54 AM