Flight connections from Greece required a one-night stay in London so instead of heading to an airport hotel,  we cashed in some Marriott points and gave ourselves a two-night, and almost-one-full-day mini-stay downtown. Within hours of our arrival we were wishing we'd allowed ourselves more time here.
Having arrived at Victoria Station aboard the Gatwick Express train, we climbed into one of the famous, ubiquitous black cabs, for a twisty, turny - rather pricey - trip through London's t rush hour traffic as we made our way to the  Renaissance Chancery Court in London's Holborn district. 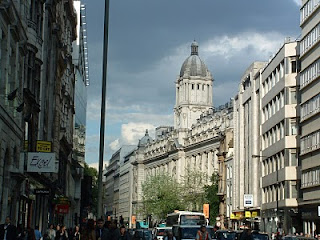 Renaissance Chancery Court
This Edwardian High Baroque-style building, built over the two-year period,1912 - 1914, was the home to the Pearl Assurance Company until 1990.  In 1998 the building was transformed into its present-day marble-pillared hotel. 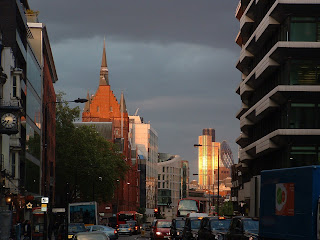 High Holborn, Gerkin in background
Our location on High Holborn, put us in an interesting historic area of the city; one known as being home to the legal and journalism professions (a perfect fit for the two of us).  The road itself is believed to follow the path of the Roman road from Londinium which was founded in the AD 50 - 100 time frame. We were walking distance to Covent Garden and the theatre district, just a few blocks beyond. Walking the opposite direction we would have been in The City, as it was, we had a view of its famous Gerkin Building.

We had enough time to get a basic introduction to the area that first evening, so we were ready to go exploring the next day. We packed a lot into that single day and the next post will tell you how we did it.
Posted by Jackie and Joel Smith at 7:54 AM

Email ThisBlogThis!Share to TwitterShare to FacebookShare to Pinterest
Labels: London