In the early morning darkness they began arriving. From our cabin we watched dark silhouettes armed with ‘guns’ and shovels wade quickly across Boone Creek toward the ocean’s receding surf. Others arrived in cars and trucks; a scant parade of vehicles easing into position on the hard-packed sand. . . 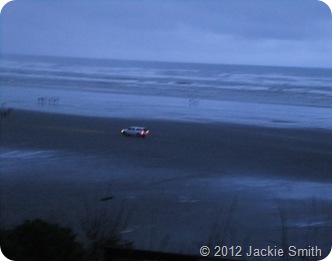 The ever-so-brief Pacific Razor Clam season had arrived on Washington State’s wet, windy, and oft-times wild Copalis (koh-PAY-lis) Beach.   The morning’s flurry of activity felt like a salt-sea version of  “Brigadoon” – the musical in which a place and time came to life for a matter of hours then disappeared as though it had never existed. 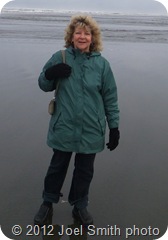 We city slickers, with mere rain coats, gloves and jeans but sans heavy duty rain gear, opted to be spectators during the search for this most sought after shell fish in Washington State.


Its popularity in past years has attracted some 300,000 people, who’ve made nearly a quarter million digger-trips to the ocean beaches and harvested between 6 -  13 million razor clams.

As we strolled the beach, we learned to look for three types of ‘clam’ signs. One, like in the photo, is the donut  hole in the sand. . .it  could be an indicator of a Razor Clam below . . .or of a shrimp. . .it takes practice to know the difference. 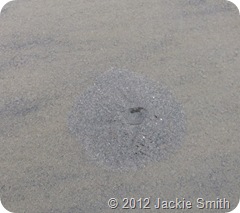 Sometime you just need to dig and find out.  That’s what the clam ‘gun’ or shovel is used for: 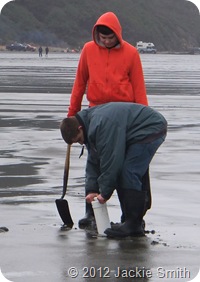 But only to a point. Then it is time to roll up the sleeves and really ‘dig it’: 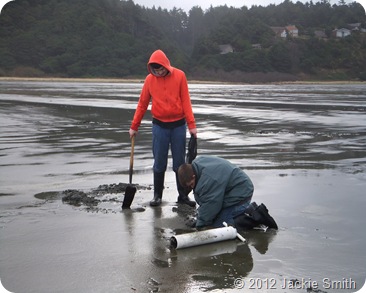 The beach was alive with diggers.  There are five Razor Clam beaches in Washington and it is not unusual to have as many as 1,ooo people per mile on those beaches on a spring clam dig day. 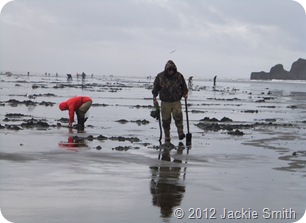 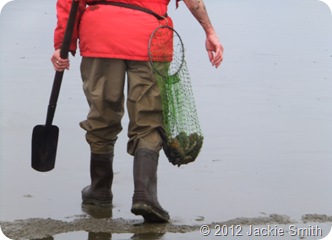 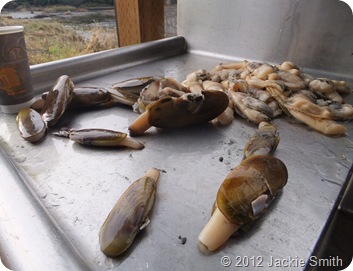 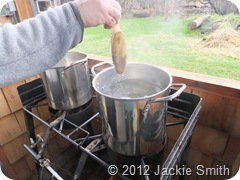 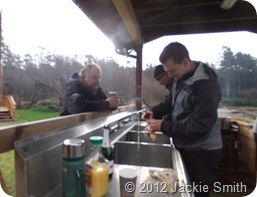 And then the little critter was ready to cook. 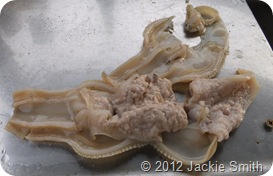 We celebrated the harvest at a Saturday night feast which included Razor Clam chowder with our hosts at Iron Springs Resort.  (The link above will take you to the recipe they used – if’s courtesy of Kevin Davis of Steelhead Diner at Seattle’s Pike Place Market.) 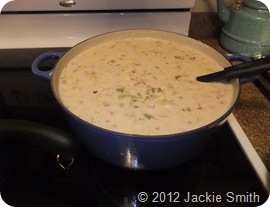 Gathered around the table with Doug and Dustin True (owners of Iron Springs Resort) and an assortment of their clam digging friends we shared  food, wine, stories and laughter.

It was Pacific Northwest life at its finest. 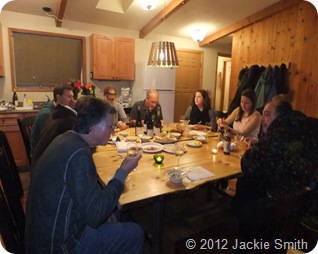 A few afterwards:  Razor clam season comes in one- or two-day spurts each year; sometimes the season can be as few as 15 or as many as 35 days. Clam diggers are required to purchase a state license and are limited to 15 clams per person per dig.

The clam cleaning station is one of the new additions at Iron Springs Resort, the mid-century resort that re-opened last year after a years worth of renovation and modernization. (See yesterday’s  Washington Wednesday for more on the resort.)

Today is Travel Photo Thursday so be sure to drop by Budget Travelers Sandbox for more photos from around the world.
Posted by Jackie and Joel Smith at 7:19 AM