Carnival Spirit: What a Difference a Day Makes!

The weather forecast for San Diego called for rain.

Not a good way to start a five day cruise that we booked because we needed sun.

We thought our forecaster was off base when Sunday morning we arrived at the cruise terminal under blue skies. There was a strong wind and it chilled to the bone but it wasn’t raining.  That was a good thing. My ‘carefree’ wind-blown hairdo illustrates the wind power (and yes I was holding the rail to fend off some of the stronger gusts).

We were bundled up but determined the strong cold wind wouldn’t dampen our spirits.

But by the time we set sail at 4:30 we not only had wind, but rain as well. This is my shot of leaving San Diego: 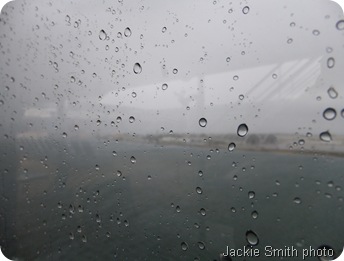 The decks were nearly deserted. . .of course many were closed: 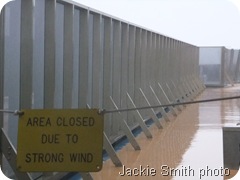 It was beginning to look like we might have made a mistake in picking this cruise.  One of the ship’s photographers told us, “I’ve sailed two cruises out of San Diego recently and they were warm and we had blue skies.  . . .Can you believe this?!”   No, we couldn’t.

But as we continued south the sea calmed and by today I am happy to report the Carnival Fun Ship Spirit is back:

And guess what?  It is Spring Break!  And not every college student goes to Florida. . .we’ve got a thousand or more of them on board with us.  I’ll tell you more of those stories as the week goes on. . .  for now I’m off to sun tan. . .
Posted by Jackie and Joel Smith at 3:37 PM