TP Thursday: Malaga–Anything to See There?

“But is there anything to see there? we are often asked about places we have been.

To our way of thinking, everything is to see there. And some of  most spectacular aren’t on a tourist map nor do they require entry fees.

Such was the case in Malaga, a city of more than a half million people and birthplace of Pablo Picasso, on Spain’s Costa del Sol.

All we knew about its Ayunamiento, or Town Hall, was that a bus stop we were looking for was near it and that it was located in the shadow of the towering tourist attraction, the Alcazaba (which means Citadel in Arabic).

When we reached the building constructed in the early 1900’s, its Neo Baroque exterior stopped us in our tracks with its beauty. 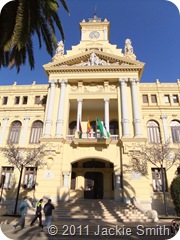 With such a stunning exterior we had to see the interior. . .

All visitors pass through a security screening/bag check.  When the security guard asked our destination, we responded, ‘Estamos touristas ~ solo veyamos’ (‘We are tourists – we are only looking’) with me pointing to my ever-present camera to emphasize the point.

And then we were greeted by the most magnificent sight: 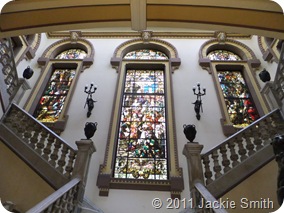 The marble stairway leading to the building’s second floor is bordered by stained glass windows depicting scenes of the city’s history from its founding by the Phoenicians to the entry of Felipe IV. We’ve since learned they were made by the Parisian glass studio of Maumejean. 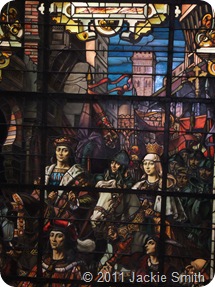 We missed the second-floor Hall of Mirrors, a room so beautiful that it is often rented for civil weddings because we didn’t know it was there until after I did some research for this post. 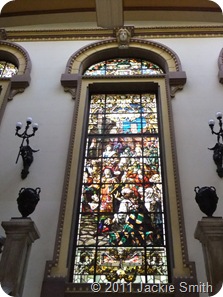 Even without the Hall of Mirrors, the building’s interior was stunning. Paintings – the fine art type – turned our stroll on the second floor hallway into a gallery tour. We perused a hallway lined with the framed portraits of all Malaga’s mayors.

And I can tell you it is the only City Hall I’ve ever visited that offers a bidet next to the toilet in its public restrooms, (or WC’s as they are called there)!

If you Go:  El Ayunamiento is located on Avda. de Cervantes, phone number 34 952 135 000, website (in Spanish) http://www.ayto-malaga.es   Although we had no difficulty entering the building and exploring the hallways on our own, I noticed at least one web site advises getting permission to visit in advance by writing protocolo@ayto-malaga.es

For more photos from around the world, head to Budget Traveler's Sandbox, the creator of TPThursday.
Posted by Jackie and Joel Smith at 8:14 AM