Celebrity Life draws to a close. . . for now. 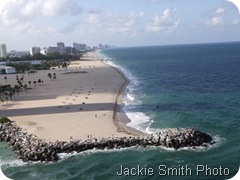 Another taste of Celebrity Life came to an end today.  And as it did, we wondered how a 13-night cruise could glide by as rapidly as has this one.

We arrived in Ft. Lauderdale, Florida at 5 a.m. Saturday, were off the ship before 9 a.m.  – and will be home by noon Pacific time on Sunday, after spending a night at a Miami airport hotel to make the airline connection.

(This beach in the photo above  is the first thing you see arriving in Port Everglades; the last land you see when setting out across the Atlantic from the port.)

After its rather unusual sanitized beginning, our cruise quickly got back to normal.  The only evidence of the previous outbreak of illness was the continued emphasis on hand washing and sanitation, elbow bumps replacing handshakes and extra sanitation in the public areas. (And by yesterday we were hugging new friends as we said goodbye – with a blatant disregard of ‘bugs’.)

The two-story library was the only part of the ship to remain closed for the cruise – sanitation of books is a difficult thing, we learned.

The ship’s doctor reported Thursday that only 21 on this cruise had been quarantined and those as precautionary measures. (There are nearly 2,000 passengers and a 1,000 crew members on board.) 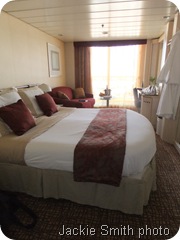 Our cabin was spectacular, and Isabelo, our room attendant, took such good care of us that we were  spoiled by his attentiveness to detail.

We were so spoiled we actually looked into hopping aboard another Celebrity ship leaving Ft. Lauderdale and extending our adventure by another week.

We decided that might be considered excessive by some of you.  However, I must tell you that we were introduced to a couple who have been on the Constellation for two months! They were getting off today and hopping another Celebrity cruise. . . now that did sound a bit excessive. 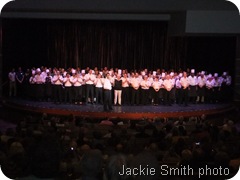 The last few days were filled with farewells and celebrations were held, like the traditional crew goodbye (photo to the right).

But I couldn’t leave you wondering about that glass of champagne I had been dreaming about being handed when I stepped aboard.  As I said things don’t always work out as planned when you travel, but good things do happen along the way, such as my champagne.  What can I say, but. . .? 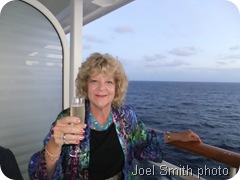 Cheers to Celebrity Life!
Posted by Jackie and Joel Smith at 12:58 PM