There are certain clichés that travel editors preach against writers using. One of them is “Oasis” as in, ‘After miles of dry desert, we happened upon an oasis.’

So with all due respect to editors everywhere, I need to tell you that we happened upon a most memorable ‘oasis’  Saturday on our road trip between Las Vegas and Scottsdale. 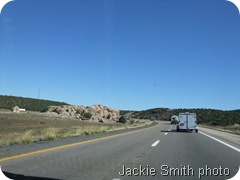 We had taken Highway 40, a route that led us east through northern Arizona’s high desert along the Coconino Plateau; a route punctuated with road signs marking our climb in elevation to beyond the the 5,000+ foot level.

Our original plan was to have lunch in Prescott, the bustling town 95-miles north of Phoenix, but by noon we were still miles from there. . . however, we were nearing a turn-off to Ash Fork. 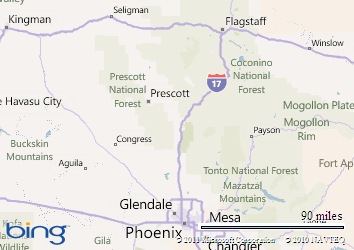 Ash Fork, with a population in 2007 of 2,300, didn’t make it on this map, but is near Seligman. It was Ash Fork, we decided, we’d have lunch. As we drove the two-lane street toward what we thought was town center a welcome sign told us this place was  “The flagstone capital of the world”. The claim was illustrated in all types of construction -- homes, planters. . .there was flagstone everywhere.

What we didn’t see was any sign of was a commercial center, that is until the Oasis appeared. . .the Oasis Lounge, to be exact. 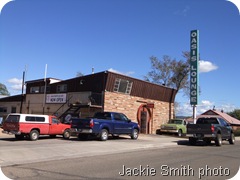 As we got out of our car, two big black guard dogs barked out a welcome from their viewing stand deck above the red truck in the photo. (Click to enlarge the photo if you want to see the canine crew).

Three people were sipping beers at the small bar to the left of the entry and a shuffle board table and pool table served as the tavern’s centerpieces.

“You folks looking for food?” called out the leather-jacket-clad bartender. He gestured to the back room and said, “The food’s back there.”

We were the only ones in the ‘cafe’ section so we selected one of the six booths that ringed its perimeter. Our booth provided a view of a Van Gogh reproduction on the opposite wall, as well as a washer and dryer sitting next to two center tables in the cafe, and a hand truck propped against another booth. Near the kitchen's swinging doors, a booth was set up with computers – we assumed it was the business office -- and near it were a couple broken chairs and some kids toys.

Okay, I have to be honest – I was ready to leave, but Joel reminded me we travel for ‘the experiences’ and this had promise of an experience.

Our waitress was also the cook.  We had a selection of a half dozen Mexican dishes from which to choose from on the 'lunch specials'.  Joel got the combination plate; I ordered two chicken tacos.  Although they came out as beef tacos, our  food was steaming hot. We were too early for the rice to be  quite ready but our cook/waitress had us taste it anyway –  (it was good).  In fact all the food was good, with a home-made good taste to it. 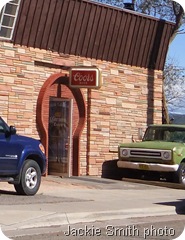 While we waited for the food we chatted with the bartender who told us the place had once been a car repair garage (note the front door in the photo – it was the car bay entry once).

The town, he told us,  had once been a railroad stop and is right off the old Route 66.

The train comes by these days - it no longer stops.  A section of old Route 66 is a scenic bypass between Kingman and Ash Fork.

As we drove out of town we noted two other more traditional diner-type eateries down the road a bit, but our stop at the Oasis Lounge at 346 W.Park Ave., Ash Fork, AZ 86320, phone 928-637-2650 proved those editors wrong: you can find an oasis in the desert!.
Posted by Jackie and Joel Smith at 2:01 PM