Now that we’ve finished the Southwest road trip, our suitcases are in the early stages of repacking for our upcoming fall adventure . . .

We’ll fly from Seattle to Spain’s interior, beginning our trip in Sevilla, departure gate to the New World a half dozen centuries ago - the perfect place to delve into both culture and history. After a few days poking around the city,we’ll hop a train out into Seville province's countryside to spend a few days in Osuna, population 18,000. Then we head south to see the mark of 20th Century tourism and the Costa del Sol.  In the port town of Malaga we’ll meet friends, pick up a rental car and head out for the trendy, touristy Marbella on Spain’s Costa del Sol.

A week later a train will take us north from Andalucia to Catalunya, where we will have a couple of days to explore Barcelona.  We’ve been here before, but always on a cruise ship stop that allowed only a few hours exploration, this time we’ll have plenty of time to ramble through its Barri Gotic and Las Ramblas and to ponder Gaude's architectural handiwork before we meet:

. . .  the cruise ship that will be our floating home for the two weeks it will take to reach the United States. 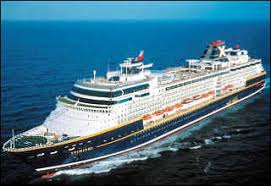 We are already thinking of the ship as ‘Connie’, the nickname given her by her former passengers/admirers. Formally, she’s Celebrity Cruise Lines’ Constellation, a 965-foot long (think 2.5 football fields) luxury liner.
Our 13-night cruise will take us from Barcelona, Spain to Fort Lauderdale, Florida; with stops in Alicante and Malaga, Spain; then after passing through The Pillars of Hercules, we’ll be off to Funchal, Madeira, and Tenerife, in the Canary Islands followed by seven ‘sea days’ as we  cross the southern Atlantic. 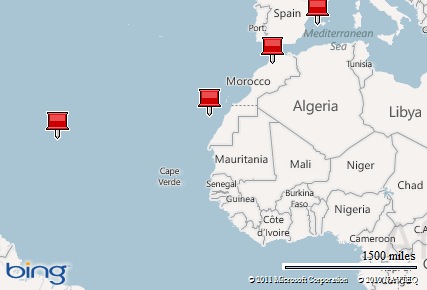 We’re sold on repositioning cruises for a number of reasons: they are a good travel value, and they provide a mix of ports of call and plenty of ‘sea days’ to kick back, relax and enjoy all the ship has to offer.
We had such a great first time experience with Celebrity on their Solstice transatlantic crossing last spring going to Barcelona, that our expectations for Connie are high.  As we did on the Solstice cruise we will tell you about ship board life and introduce you to folks we meet along the way.
Note:  We’ve listed a number of agencies and websites that we’ve used to nab some incredibly good cruise fares on our TravelnWrite Deal Finder page.  It isn't too early to think about spring repositioning cruises. Some, like the transatlantic crossings, can take a couple weeks.  Others, like one we took from Vancouver, B.C. to Seattle, was a one-night 'crossing' and made for a fun Pacific Northwest getaway.
Back to Spain and our cruise: Do you have recommendations for us?  Restaurants? Flamenco shows? Tapas bars?  Send your tips by email or leave a comment.  And what about ‘Connie’ – are you a member of her fan club?  I'll compile your responses in a future post.
Posted by Jackie and Joel Smith at 7:34 AM