The next best thing to actually traveling there, is being transported by some writer whose skills with the written word take us from Kirkland to far-away places.  We've had some great armchair trips this summer to: 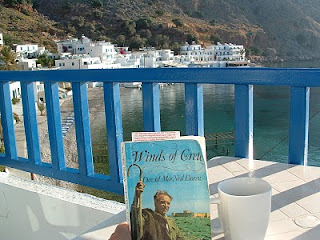 "Winds of Crete" Loutro, Crete
A very used, dog-earred paper-back copy of Winds of Crete, by David MacNeil Doren, that I found in Portland, Oregon's Powell's Bookstore kept us totally absorbed as the author recounted the six years that he and his wife lived in Crete.  The book was first published in England in 1974.

Who Pays the Ferryman? a novel by Michael J. Bird, based on his BBC television series of the same name, took us to some of our favorite cities as we followed the story of Alan Haldane's return to Crete after a 35-year absence and the love story that ensues. We ordered this book, first published in England in 1977, from The Book Depository (which offers free world-wide shipping; no minimum purchase required).
In his, The 8:55 to Baghdad, we tagged along on his 2002 trip from London to Iraq on the trail of Agatha Christie, the legendary mystery writer, who as a 30-something recently divorced woman in 1928 made the trip alone.  He masterfully weaves a biographical account of Christie into his travel tale that had us wanting to hop the next train from London and learn more about Agatha's travels. I came across this book in the biography section at a  Barnes and Noble.

(This book re-ignited our desire to read more Agatha Christie books and have just completed a cruise in her Death on the Nile and took an English garden tour in Nemesis.)

Patrick Leigh Fermor, the British travel writer who at age 18 in 1933 set out to walk the Hook of Holland to Istanbul provided the inspiration for Eames' Blue River, Black Sea, the story of his own journey on foot, bike and horseback along the Danube into the heart of the New Europe. 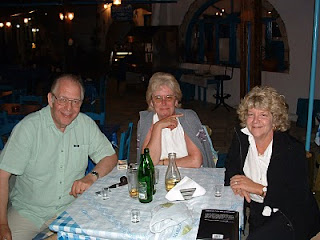 Sipping raki with Bill and Val Kitson
The first book -- in what we hope will be a long series of mysteries -- introduces detective Mike Nash, in a riviting read titled Depth of Despair.  I ordered it on-line through Amazon.  While not a travel book, the plot has taken us from tarns in England's Lakes District to Russia and back. It is a book with such a gripping storyline that it we found it hard to put down.   I've just received the second book in the series, The Chosen, also set in England, which by coincidence opens with an article, fictitious of course, from The Seattle Times.

Note: I've been able to add all but one of the books referenced in this post to the Amazon carousel that appears on our blog - if you click on a book it will open an Amazon page that describes the book, author, and offers professional and reader's reviews.  And yes, if you click on one of the books and ultimately buy it from the carousel, we get a few cents from the sale.  (That's a disclaimer; not a sales pitch!)
Posted by Jackie and Joel Smith at 4:11 PM