Tonopah, Nevada - a gem of a mining town 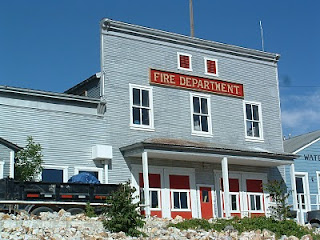 Tonopah, Nevada
The High Plains Drifters spent our second night of the road trip in Tonopah, Nevada, an old silver-mining town in the central part of the state that got its start when in 1900, a prospector by the name of Jim Butler took shelter from a thunderstorm under a ledge. . .yup, he whittled away at that ledge and sure enough struck silver. (Need I say there's a hotel in town that carries his name as do festivals?)

The town's prosperity peaked in 1913 when mining had netted some $9.5 million.  These days the mining still continues.  Turquoise jewelry sold in one of two gift shops in town was mined from the nearby hills, we were told.  In fact Nevada is the fourth-largest gold producer in the world and is responsible for 80 percent of all gold produced in the United States.

Tonopah is but a wide spot on the vast Nevada countryside offering a half dozen hotels (and two shells of what were once vibrant multi-storied hotels), a few watering holes and eateries.  But it is a charming wide spot - we planned this trip so we could spend a night here, having spent a night several years ago at the Best Western.  This time we stayed at Tonopah Station, the Ramada Inn, with an over-the-top Wild West decor. At this hotel you roll dice to see if your room is free -- it is Nevada, afterall -- and they told us that usually twice a day people win their rooms; sigh, we didn't. 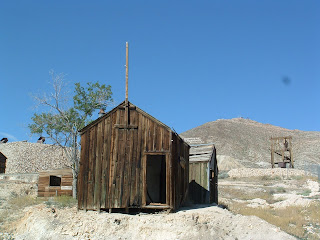 Cabin at the Mining Park
And the hotel's parking lot lights were so bright I never did do any stargazing.  We may have to go back just for the purpose of Star Gazing now that we have a map of the areas best star gazing trails.  We also plan to visit the sprawling Tonopah Historic Mining Park where we can take a self-guided walking tour of Jim Butler's original discovery sites.  The "Burro Tunnel Underground Adventure," opened in 2004, takes you into the original mine and at the end, you can step into a steel viewing cage, suspended over a 500-foot mine slope.  Maybe we will do that part. . .
Posted by Jackie and Joel Smith at 2:17 PM