Sunday Snippets: Greece Has Got Talent!

We had the good fortune to meet a number of interesting people while traveling through Greece.  As most of you who travel will likely agree, some of the most interesting things happen in the most unlikely settings. . .

We’d set out on foot to explore Athens on that May 1st Labor Day; a holiday of sorts when many workers were ‘on strike’ and gathered in Syntagma Square. Others simply weren’t working and most stores were closed. 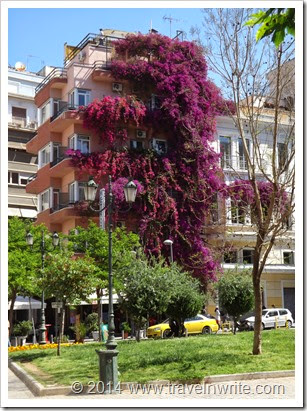 We strolled the pedestrian-friendly Ermou Street that leads from Syntagma Square (and fronted our hotel) then looped our way through tree-lined boulevards and past small urban parks.

However as we walked through the popular-with-tourists-area of Plaka we were drawn to an art and jewelry store - first by the window displays and then by a friendly employee whose smile was sunshine.

We weren’t really shopping for anything, we told him. . .didn’t need anything else in the suitcases.  He didn’t mind – ‘take your time’ – he said as he explained the intricacies of various objects.

The conversation was the usual: Him: Where you from? How long are you here? Us: Were you born in Athens? Where are you from?


And then somewhere in the chit-chat we learned he was a singer – a real-live singer. He is hired to sing at weddings and other celebrations and has regular weekend ‘gigs’ at a few places he named for us. Elvis, Frank Sinatra . . .he can sing them all.  And to prove it he broke into song, singing Frank Sinatra’s “Fly Me To The Moon” for us right there in the middle of the showroom.

And then Nikos Georgas, who is in his late 50’s, told us that he was named the 2010 winner of Greece Has Got Talent, (a show much like the American version)  At that news, I told this Grecian crooner I had to take his photo so he insisted The Scout pose with him.

We had liked a couple of objects and told him we would think about them and perhaps return. He replied, “That’s fine. I am a singer – not a salesman.” And then added, “When you get home you can find me on You Tube.”

You know what? We did. And here’s a link to the winning announcement – it is in Greek, but you will understand it no matter what language you speak – do check out this amazingly talented man. Stick with it for a sample of his many songs.

http://www.bing.com/videos/search?q=nikos+georgas+2010+Greece+has+got+talent&FORM=VIRE5#view=detail&mid=1ED9FCFFC1B491ACF5471ED9FCFFC1B491ACF547
Have you ever had a similar unexpected pleasure in an unlikely place? We’d love to hear about it.
Posted by Jackie and Joel Smith at 10:23 AM