Discovering The Montparnasse Piano Bar, one of a dozen of so chic bars that light up Little Venice from dusk-to-dawn during this island’s madcap tourist season, is one of the high points of our trip to Mykonos.

Although our time on the island was short, we managed to get in two visits to this legendary watering hole that has cultivated a loyal following among locals, tourists and ‘big names’ alike since its opening back in the early 1980’s. 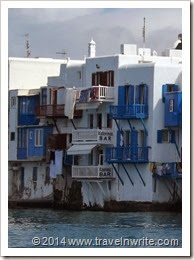 But first a bit about Little Venice, one of the most romantic – and certainly among the most photographed – spots on Mykonos:
The 18th Century buildings with wooden balconies that make up the area served as homes of sea captains or pirates, depending on what version of the story you’re told. Some are still homes (and available to rent) and others are filled with bars and boutiques. You explore the area following a winding maze of narrow walkways as old as the buildings themselves.

It is fun to explore at any time of day, but it wasn’t until this trip that we learned how much fun it was at night.

We’d likely never have discovered ‘The Piano Bar’ had it not been for our American friend and novelist, Jeffrey Siger, who spends half his year on Mykonos – writing books.
(We’ve introduced you to him and his books in earlier posts.Click the link to see them.) Over breakfast at the hotel our first morning, he tipped us off to the bar’s seasonal reopening just the night before.

The bar – and its real life owners, longtime personal and professional partners, Nikos Hristodulakis and Jody Duncan – has appeared in the fictional crime mysteries Jeffrey writes as well as in the posts he contributes to the blog, Murder is Everywhere. 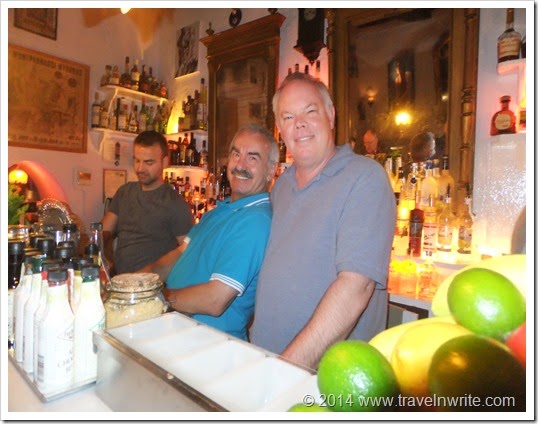 Arriving at a rather unfashionable early hour for Mykonos nightlife - 9 p.m. – we were given a warm welcome by Nikos and Jody (pictured above). With few ‘early birds’ they had time to share laughs and stories with us as though we had been regulars for years; a warmer welcome than at some places we have frequented for years.

The pianist, David Dyer from Colorado, who has been a springtime featured performer at the bar since 1987, began playing at 10 p.m. and had we not had an early morning outing scheduled  the next day we’d have stayed much longer listening to his repertoire.

His music was exceptional and brought us back to sit at the bar – just like regulars - the next night. The place reminded us of “Cheers” the bar featured in the U.S. television comedy (1982 -1993) where ‘everybody knows your name’.

That evening we made the acquaintance of a longtime visitor from Sussex, England who regaled us with tales of traveling in Mykonos decades ago - back when there wasn’t even a ferry dock and passengers got to shore aboard tenders.


I’ve long advocated the fun of doing ‘novel’ research for our travels. Often times visits to locations appearing in fiction stories make for some of our best travel experiences. And this bar didn't let us down.
I couldn’t decide if the artwork that fills The Piano Bar walls highlights the old wooden ceiling or vice versa. The Piano Bar which got its start at another Mykonos location moved in 1994 to the present location, that of Montparnasse, an art gallery that opened in the late 1960's and quickly became a gallery and bar. 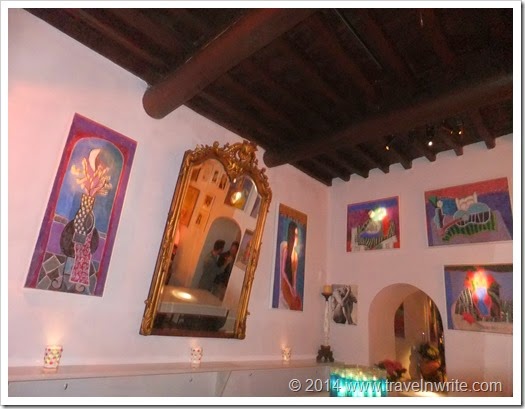 Candle light and flowers accented the bar and lounge areas and added to the bar’s welcoming atmosphere. It is definitely worth a visit should you find yourself in Mykonos. (And travel tip: its lounge provides a great place to watch those postcard sunsets!) 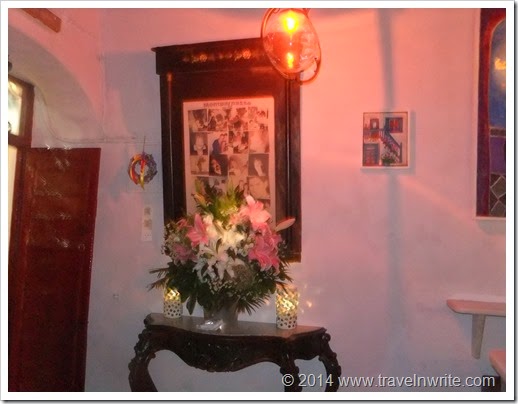 While today we focused on drink, we’ll be back Tuesday serving up some photos of our food finds. Hope you’ll join us then for another taste of Greece. Until then, “Happy Travels” and a big welcome to our new subscribers! Linking up with Noel Morata's Travel Photo Monday
Posted by Jackie and Joel Smith at 8:27 AM