And if you don’t believe that, just head to Bari, Italy and visit the Basilica di San Nicola (Basilica of St. Nicholas).  The remains of this Patron Saint of sailors, merchants, children, archers and thieves have been resting here since 1087!

Because the church was built on what was previously the residence of the Byzantine Governor (Catepan’s Court) historians can’t quite agree on the stages of construction.  The underground Crypt where the remains are enshrined was consecrated in 1089.

Whatever the sequence, the end result is an enormous structure; one well worth visiting. 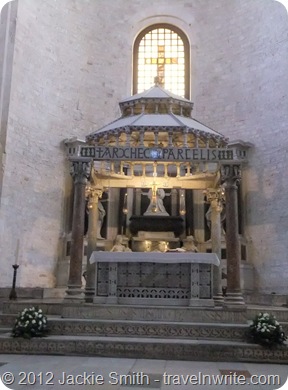 We visited the Basilica of San Nicola  this fall when the Celebrity Silhouette stopped for a day in Bari.

Depending on the version you choose to believe, Saint Nicholas relics were either ‘removed’ or ‘rescued’ from the saint’s original shrine in Myra, located in present-day Turkey by a group of sailors and merchants from Bari. 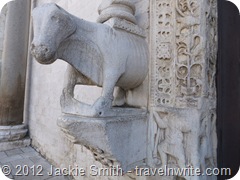 There had been great competition between Venice and Bari, both seaport towns on Italy’s eastern shores.  But legend has it that the saint passed by Bari on his way to Rome and had chosen it to be his burial place.


So, who was Saint Nicholas and what’s the link to Santa Claus?

Saint Nicholas, who was born around AD 270, is believed to be from whom the present day Santa Claus evolved. Saint Nicholas was a real human being born in the village of Patara, which at the time was a Greek holding and today is part of Turkey.

Saint Nicholas was orphaned at an early age and is said to have given away his entire inheritance to help the sick and suffering. He dedicated himself to serving God and became known as the Bishop of Myra and known for his love for children, concern for sailors and their ships and his giving to those in need.

Known for his giving of gifts, stories abound about his generous acts, and much like all stories about him vary. Perhaps the most popular story to carry through the ages is:

There was a poor man who was unable to provide his three daughters with dowries. Without anything to offer prospective husbands (other than love, that is) the daughters would most likely have been sold into slavery. Then without explanation, on three different occasions, a bag of gold (or gold balls – depending on the version) appeared in their home providing the funds for the dowries. Some say the bags were tossed by Saint Nicholas through an open window – others say down a chimney but each landed in stockings or shoes left before the fire to dry.

This led to the custom of children hanging stockings or putting out shoes, eagerly awaiting gifts from Saint Nicholas. Oranges are used in symbolize the gold balls . . .have you ever found an orange in your stocking and wondered why? 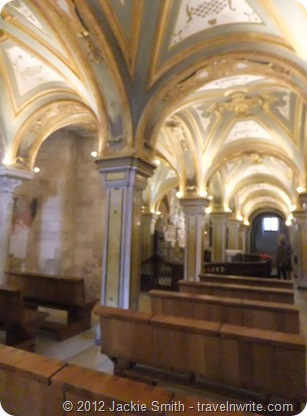 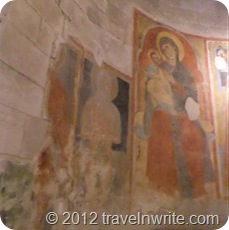 History shows he attended the Council of Nicaea in AD 325.

His death on December 6, AD343 continues to be a day of celebration, St. Nicholas Day (December 19 on the Julian Calendar).

Since 1951 the basilica had been home to a community of Dominican Friars and is now an active ecumenical center. 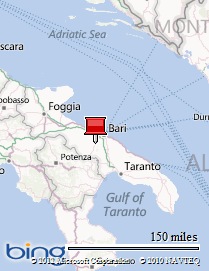 The Basilica di San Nicola is on the piazza of the same name within the remaining walls of the ancient city of Bari. It was a 20 minute walk from the cruise ship dock, a bit further from the Central Train Station. We didn’t use the recommended shuttle.

For information on the Basilica: http://www.basilicasannicola.it/home/index.php?lingua_id=2

For information on Saint Nicholas: http://www.stnicholascenter.org

All photos in this post are Jackie Smith’s with the exception of the photo of the Russian icon of St. Nicholas from The Elsner Collection. It is used under Creative Commons licensing agreement with Wikipedia: Photo by The InstaPLANET Cultural Universe .
Posted by Jackie and Joel Smith at 9:46 PM