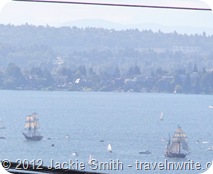 Sails unfurled, the boom of cannons re-echoed in the distance from Lake Washington.  We could hear and see from our Kirkland home, the battle – mock, of course –  each afternoon of September’s sunny Labor Day weekend.

Washington's Tall Ships were in town.

If you’ve never seen the Tall Ships,  -- Lady Washington and the Hawaiian Chieftain -- owned and operated by the Grays Harbor Historical Seaport in Aberdeen, you are missing a treat.  They can be found traveling the Pacific Coastline from British Columbia to California, stopping at ports like Kirkland, along the way. 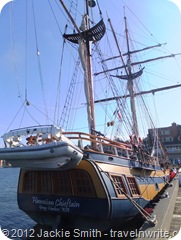 The Hawaiian Chieftain, is a replica of the ships used by European merchants and is similar to those sailed by the Spanish off the Western Coast of the United States.

The Hawaiian Chieftain, built of steel in 1988, was purchased by Gray’s Harbor Historical Seaport in 2004 and now accompanies. . . 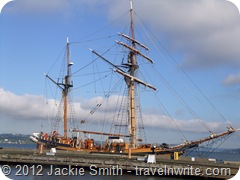 The Lady Washington which was built in Aberdeen and launched in March 1989.  The ship is a full scale reproduction of the original 1750’s Lady Washington – the first American vessel to make landfall on the West Coast of North America. 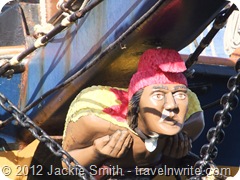 The best part about these ships is that the public can buy tickets to tour the vessels or sail on them while they make their guest appearances up and down the West Coast. And if you are really into tall ships there are a variety of volunteer opportunities available as well.

The ships can be rented  for charters, group tours and education programs – and if you are making a movie and need a tall ship, well, give them a call.

To Sail On The Tall Ships: 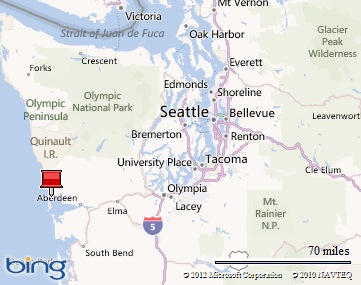 You can often find the ships in their home port in Aberdeen but with their heavy tour schedule, it is best to plan ahead and see if they will be there or not during your visit. To check their sailing schedule and locations -  and to buy tickets - visit the Grays Harbor Historical Seaport website.
Posted by Jackie and Joel Smith at 6:45 AM