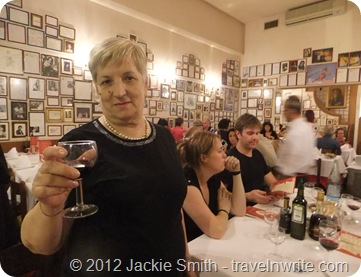 The serendipity began weeks before our Italian trip. I’d written, BolognaWelcome, the  city’s tourism site for some information.

Enter Giorgia Zabbini, (pictured to the left). She works for the Municipality’s tourism office and became our source of information both before and during our visit.

She was guiding us on a winding path through the city’s famous arcades, when several blocks from the tourist-filled 13th Century Piazza Maggiorri, she stopped before an unmarked store front so that we could note the pasta being made inside. 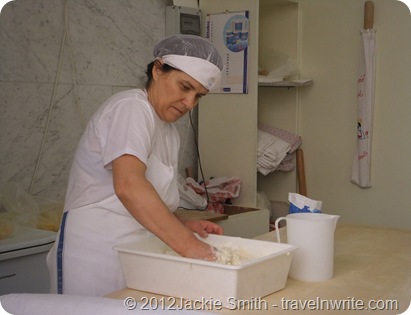 The ladies were more than gracious in granting my request to photograph them as they kneaded and rolled out pounds of pasta, that we learned would later be served to diners at Trattoria Anna Maria. 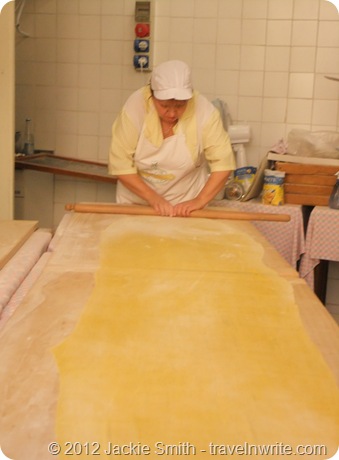 Anna Maria’s is one of those places that all the locals know about – the kind of place that serves ‘real authentic Bolognese food’ Giorgia said, adding that we ‘might want to try it’ while in town.

Understatement! Within minutes we we at the restaurant securing  reservations for the next night. . . 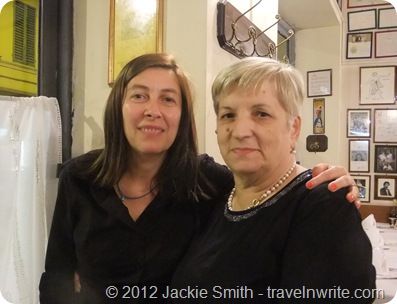 We’d hoped to meet Anna Maria  as she made the rounds that evening, chatting with guests, checking on customer satisfaction – as she does each evening.  But what we didn’t expect was a full-blown visit with her.

We’d barely been seated when Laura Bizzari, (on the left in the photo above) introduced herself and said that Anna Maria would join us shortly and Laura would serve as our translator. 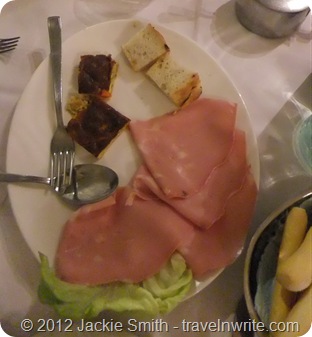 The wine was poured. The antipasti plate with omelet squares, bruschetta and mortadello (the meat for which Bologna is famous) arrived and we met this delightful 72-year-old restaurant owner.

Trattoria Anna Maria began 24 years ago in a smaller location a few blocks from its present site. Back then, Anna Maria was both waitress and chef, serving menu items created from her mother’s recipes. 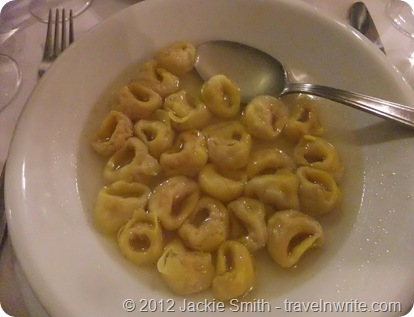 The restaurant may have changed locations, but recipes have stayed the same.  Tortelloni en brodo, those wonderful stuffed pasta pockets served in broth was our first, ‘first’ course.  It, like the pasta used in lasagne, tortellini, and the long thin strands of tagliattelli, is hand-made daily by the ladies pictured above. (They had used 136 eggs the day we visited – which should give you an idea of quantities produced each day). 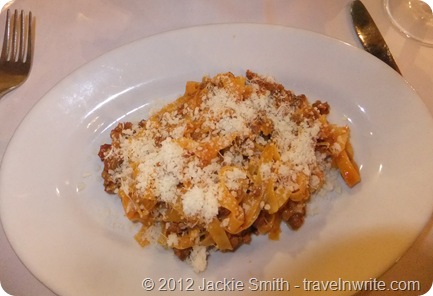 Our second ‘first course’ was tagliattelli in Bolognese, the famous meat sauce of the area. My mouth waters at the memory of these thin, near-translucent noodles that melted in our mouths.

Anna Maria sources as many of the products as she can from nearby farms and producers. She’s worked with some of them for years and was practicing that culinary ‘farm-to-table’ philosophy long before  it became trendy. 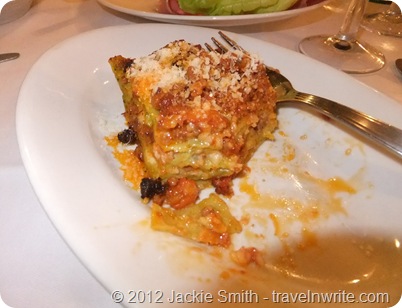 Yes, this lasagne was the third ‘first course’ and I hate to admit that it was so good that I forgot I was taking photos of each course until half way through it.  We did declare a stop after this and didn’t sample any of the items on the extensive ‘segundi’ or second, main course list. (Okay in full disclosure, we shared a home-made gelato and fruit for dessert.) 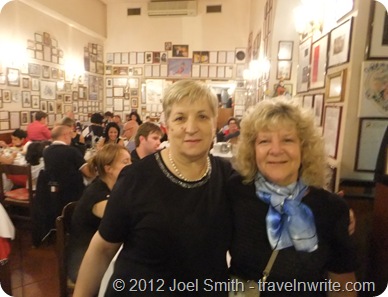 The restaurant was jam-packed by the time we left, several hours after our arrival.  Anna Maria was making her rounds, obviously enjoying her guests. Her earlier comment, when we’d asked about retirement plans, came to mind:

If You Go: Trattoria Anna Maria is at Via Belle Arti, 17/A, Bologna. Information at www.trattoriaannamaria.com Credit cards accepted and is English spoken.

In full disclosure: We didn’t know until we asked for the bill, that we were Anna Maria’s guests that evening.  That wasn’t our intention in going there.  (I will add that going back to this restaurant is high on our list of reasons to return to Bologna. The pastas were incredible.)

This is our contribution to Travel Photo Thursday.  You’ll find more photos at Budget Travelers Sandbox.
Posted by Jackie and Joel Smith at 8:25 PM