I began this post on Tuesday, September 11th at some 30,000+ feet over Chicago en route to Washington D.C.   Then I changed my mind. . .I am a white-knuckler when it comes to flying after all and I don't believe history repeats itself but I decided not to test fate, as only a white-knuckler would understand.

In total disclosure I need to tell you that it was an uneventful flight and aside from a few bumps from turbulence there had been nothing to excite even the white-knuckler in me. I’d even sailed through the new Pre-Check Security line at SeaTac with coat and shoes on and liquids and computer in my bag – three minutes max. 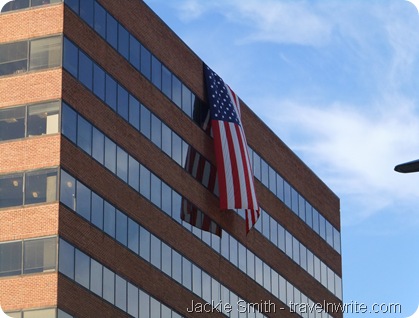 I am glad I waited until this morning, September 12th to finish it though because I can show you a sample of how the Arlington, Virginia city scape appeared as we arrived on September 11th.  (I am attending a conference here this week, we are just blocks from the Pentagon and Arlington National Cemetery.

It was a landscape of patriotism.

And the one that really caught my eye is a block from our hotel on the Arlington Courthouse complex.  It marks the site of Fort Woodbury that had been on this location from 1861 - 1865.  It also reads: 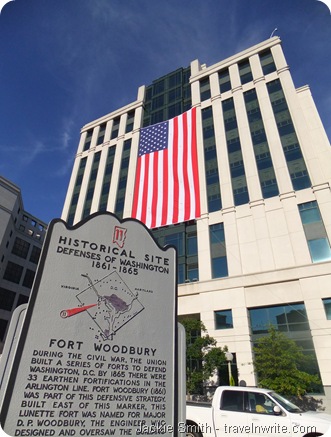 Posted by Jackie and Joel Smith at 4:14 AM