The lure and love of  Spain and Greece has become so strong, it was difficult this year directing ourselves towards one of our old favorites, Italy.

Make that ‘difficult’ until a cruise itinerary of the Celebrity Silhouette from Rome to Venice called out, “La Dolce Vita!”

We’ll be living that Italian ‘sweet life’ as well as having some interesting stops as we loop the boot-shaped country, in Malta, Greece, Montenegro, Croatia, and Slovenia. 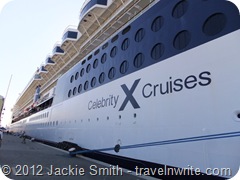 The Silhouette, with an occupancy of 2,886, is a new-comer to Celebrity’s Solstice Class ships, having been launched in July, 2011.

(For those of you cruise enthusiasts out there, Solstice Class ships were  named the “Best Cruise Ships” 2011 by Frommer’s travel guides.)

We first sailed a Solstice Class ship in the Spring of 2011 and have been smitten with these vessels sprouting a live lawn on their top level since then.

The Silhouette is sporting some new features like an Arts Center, which replaces the hot glass art demonstration studios still operating on earlier Solstice ships.  This Arts Center offers classes as a cooperative project with the Art Center/South Florida.   Don’t think we’ll have time to take a class though as all but one of our 12-days on board will  be at some interesting port of call. 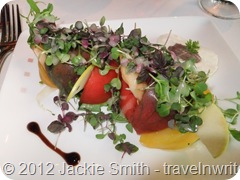 We were pleased to see that Murano, the fine dining restaurant, has been retained on this new ship. But I doubt that we’ll be trying Qsine, the restaurant where you order food and wine from an iPad, that is provided.  (The thought makes these techno-dinos shudder!)

Our stops in each port of call will be full-day visits, arriving at 8 a.m. and not leaving until 5 or 6 p.m.  That kind of schedule also gives us plenty of time to explore the towns and sample some of their food specialties – think Naples, think pizza!

Culture, cuisine, cruising – sounds like La Dolce Vita to me!

Cruising is an easy way to see a lot of places in a short period of time.  Admittedly, you get but a taste of each  place, but you can also return for a larger slice of life in the future.

When booking a cruise, be sure to ask about:

* The cost of on-board gratuities and whether they are included in your rate or to be paid separately.
* Whether port charges and possible fuel charges are included in the rate or if they will be added.
* What on-board spending credits or perks (like priority boarding or special on-board events) are included.

Now that you know where we will be off to this fall, do you have any tips for us in any of the ports of call?  Be sure to check out Joel’s “Deal Finder” page to see how he shops to find our cruise deals. Follow us on Facebook or subscribe to have our free posts arrive in your inbox. See you soon!
Posted by Jackie and Joel Smith at 9:30 AM