Bucerias, Mexico: Back to our Future

There was a time when Bucerias, Mexico, a small fishing village north of Puerto Vallarta on Mexico’s west coast was our future. Now, it's a sizeable segment of our past. Earlier this month we revisited that past. Seven years ago we sold our last property there, The Dolce Vitas, and filed Mexico away in our history book.

(Unlike our Casa de la Playa below, the DV’s still stand – next to them these days is a restaurant offering live music and dancing.)

Back to our Future 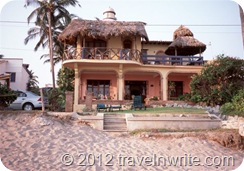 In 1991 the laid-back fishing village we selected as the site of our second home --our heads filled with all the giddy future plans that go with such investments – there were maybe six restaurants.  Accommodations included a couple of Mexican-owned and operated low-end  hotels, a condo building or two, and a few privately-owned homes, such as ours, that served as vacation rentals.

The town’s landmark were the stalls of oyster vendors that lined the two-lane Highway 200 that bisected it.

From our U.S. home we brought supplies – sheets, towels, kitchen supplies –to the south-of-the-border house (in oversized suitcases; thankfully, before baggage fees came to be).

Bucerias  is now a part of the tourist-zoned, Riviera Nayarit.  And tourism has come to town! (Along with the multitudes of over-zealous trinket touts and timeshare sales people that seem to come with Mexican tourism.) 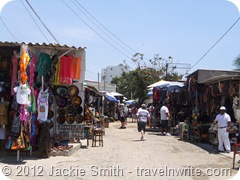 The gauntlet of trinket touts lines every street leading into town from the old footbridge over the dry, dusty arroyo. The constant calls:  “Hey Lady, come look!” “Hey, how long you here?” “Good prices, almost free!”  made us want to shout: “Enough already!” 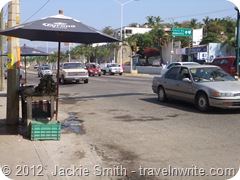 Oyster vendors? We saw one  lone table  stacked with oysters to the side of  a ‘lateral’.

The laterals, those local access roads to the side of the highway, have been enlarged to two lanes each direction as has the highway itself, 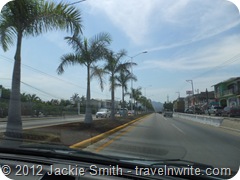 making the road through town an eight-lane super structure with a palm-tree lined median strip. 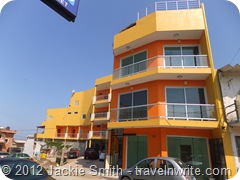 Accommodations abound. This hotel sits across from the fish restaurants that still line the beach in the town’s el centro.
High rise condo buildings with unit price tags starting at $300,000US, are sprouting like beach grass all over town. The rental site, Vacation Rental By Owner, lists 129 accommodations – unlike the half dozen listed when we owned there. 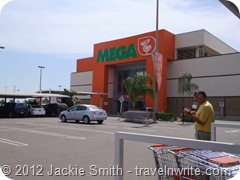 Household supplies are readily available from Costco, Walmart, Sam’s Club, Home Depot, in Puerto Vallarta, and the Mexican chain, Mega in Bucerias.  Each store is stocked with ATM’s.  Bucerias  has banks now as well.

Bucerias isn’t the town it once was, but we aren’t the same either. As we all know sometimes change isn’t always bad.  Have you revisited your future lately?  If so, what changes have you found?
Posted by Jackie and Joel Smith at 1:26 PM