Safely South of the Border, down Mexico Way

Two month ago, the U.S. Department of State, Bureau of Consular Affairs, issued a lengthy advisory about travel to Mexico. 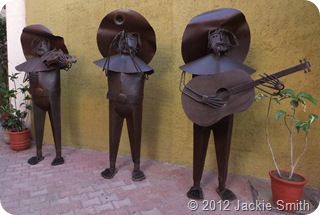 It notes that while hundreds of U.S. tourists and students continue to successfully visit our neighbor to the south, there are some places that should be avoided and others where common sense when traveling should be used. 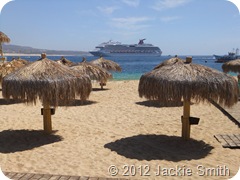 We didn’t pay much attention to the early February warning because Mexico travel wasn’t on our radar screen then.

That’s changed. Not only did we take a short cruise to Cabo San Lucas  in March, we are soon heading to Mexico’s Riviera Nayarit for a two-week timeshare stay.

A few friends have responded to our south-of-the-border destinations with the skeptical raised eyebrow and almost whispered: “Are you sure you want to go there? It’s not safe right now is it?”

An answer to those questions: 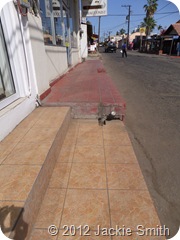 We had two days to wander through Cabo San Lucas; around the touristy marina area and then on cobbled streets with uneven sidewalks into the town’s el centro, the center. On our two morning excursions we were on our own, heading where ever our feet led us.

I wore jewelry and carried a purse and camera. We felt safe . . . aside from a fear of breaking an ankle on those crazy Mexican sidewalks, pictured to the left,  that raise and lower without notice.

The streets were pretty much empty other than for shopkeepers and a few other tourists.

The only time we were verbally accosted was when a timeshare salesman called out. We stopped. He showed us photos of the development he was pitching and then of his family. 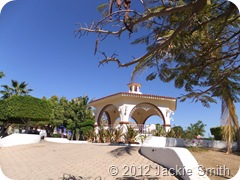 Ricardo Garcia Castro, director of Planning and Tourism Development in Baja California Sur, quoted in Los Cabos Magazine, may have said it best:

“Mexico is a very large country and the lack of knowledge of geography by the American media make people [think] an incident in Ciudad Juarez, Chihuahua affects Los Cabos and the California Sur. It is like if an incident in New Jersey would affect Florida or Montana.”


Nayarit Advisory:
Out of curiosity, not concern, I’ve read the U.S. State Department advisory and this is what it says about our upcoming destination. (I’ve added the boldface highlight): 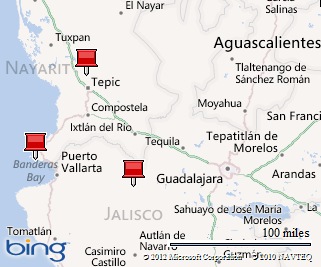 “Nayarit: You should defer non-essential travel to all areas of the state of Nayarit north of the city of Tepic as well as to the cities of Tepic and Xalisco. The security situation north of Tepic and in these cities is unstable and travelers could encounter roadblocks or shootouts between rival criminals. There is no recommendation against travel either to Riviera Nayarit in the southern portion of the state or to principal highways in the southern portion of the state used to travel from Guadalajara to Puerto Vallarta.”

Our planned safeguards: I will be leaving  jewelry in our safe deposit box at home, but by now you know I can’t travel without a camera. It will be with me, as will my purse.

We will travel using common sense when out exploring. But are we going to get out and explore our old haunts tucked away in the Sierra Madres between Guadalajara and Puerto Vallarta?

You can be sure of it!

What about you?  Been to Mexico lately? If so, what was your experience?

Note: Click the link in the opening paragraph to read the entire U.S. Department of State travel advisory for Mexico issued Feb. 8, 2012. Click the map pins for details.
Posted by Jackie and Joel Smith at 11:42 AM