The cooks moved in synchronized precision preparing and handing off  plates to the parade of wait staff who would deliver them to the hundreds of fellow cruisers eating that night in Carnival Spirit’s formal dining room.

We watched the  choreographed movements from the pastry table at one side of the ship’s shining stainless steel galley; a culinary arts gallery, not galley, we thought.  We also sipped a glass of Prosecco, (that white Italian wine with just a bit fewer bubbles than champagne), with our Head Chef Jerry Furtado. 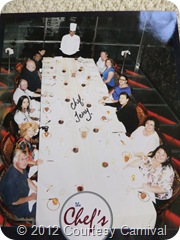 Actually our Chef Jerry only sipped only enough to make a welcome toast to the 13 of us who were embarking on a near three-hour, eight-course gastronomic odyssey known as “The Chef’s Table,” ~ a fine dining experience that surpassed anything we’ve ever experienced on any of our previous cruises.

Our extravaganza began with a tour of the galley, and a private reception there which included a sampling of appetizers with such goodies as: Chorizo and dates, Piquilo Sofrito and Langoustine and Sundried Tomato Jam Fritters. (sorry, photos weren’t allowed in the galley).

Then it was on to our private dining room and a parade of food so delicious that even writing about it now, several weeks later, can make my mouth water.   There is not enough room to show you it all, but here’s a taster: 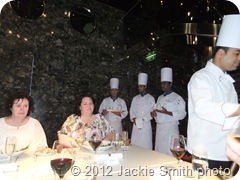 Our wait staff  hovered throughout the meal to make sure everything was as it should be, asking repeatedly, “Is it to your liking?” 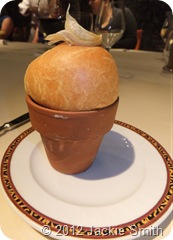 This garlic brioche was too much for my will-power. It was baked in a miniature flower pot. Way too cute and way too tasty. . .I ate it all and they brought another!


The Chef’s Table was launched as a pilot on a few Carnival ships in 2010 and as result of its popularity it is now offered on all 23 ships in the fleet. 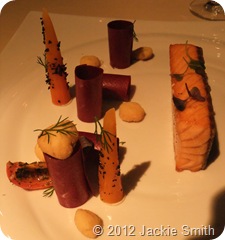 We had been on the ship for only two hours when we learned of the dinner and that there were only a couple of spaces were left. Make note, word is out: this experience is popular!

The cost was $75 per person which included unlimited wine (as if you had room to drink to excess) and included the galley tour and souvenir photo.

The photo above was of the salmon course (which arrived fifth in a series of scrumptious offerings).  What I found most delightful on this plate was the paper thin red rolls standing to the left of the salmon. They were dehydrated beets and the dark speckles on the carrots were a dusting of truffles. 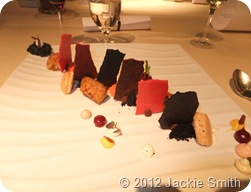 The salmon was followed by a course called Wagyu, slow stewed short ribs and the dinner finished with the plate pictured to the side, simply titled, “Chef in a Candy Shop”.

Each morsel was mouth-watering, including all those little morsels tucked between the wafers. By the time we got to this course I was in a near coma- state from overeating. . .I sampled half these ‘tasties’ wishing I had just a bit more room.


Should you find yourself on a Carnival cruise in the future we would wholeheartedly recommend signing up – early! -- for The Chef’s Table. You won’t be disappointed.  I can tell you that meal alone is reason enough for me to take another Carnival cruise.

Note:  Google has changed its format and I am on the road, bear with me if the spacing and flow of this post is jumbled.
Posted by Jackie and Joel Smith at 6:05 AM