We’ve spent a good deal of time in my hometown in recent weeks because I had a number of reunions to attend this summer.  And they couldn’t have been held at a better time. It meant we were in Yakima, during harvest season – the absolute best time of the year to visit. 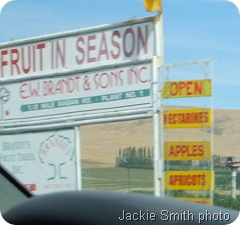 August’s 90-degree days allow us to open the car windows, and breathe the heady scents of tree-ripened produce when driving on one of what I call my favorite ‘Fruit Loops’. They are those winding two-lane roads that lead through orchards heavy with peaches and apricots, and past sprawling truck gardens where vegetables are grown and then sold at mom-and-pop stands along the roadway. 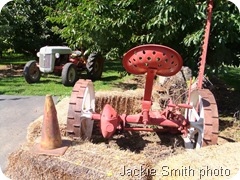 Saturday morning we drove a ‘Fruit Loop’ northwest of town through the orchards in the West Valley area, into Peck’s Canyon and toward Tieton, another small agricultural town a stone’s throw from Yakima. 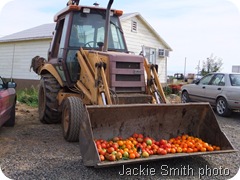 Sunday morning we headed south from Yakima on Highway 97 to Lateral A in the Lower Yakima Valley.  We followed it to Kyles Korner, where produce and fruit stands can be found on nearly every corner.  Temptations were great – how much can one load into a car?  Well, we weren’t as bad as the photo implies, but we did stock up on fruits and vegetables. 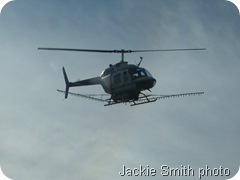 If You Go:  The Yakima Valley Visitor’s Center has a map of the valley’s agricultural areas and can tell you what crops are in season.  Just click the word Yakima in the post to get to their website.  Or drop us an email, and we’ll tell you where we shopped.

Oh, in case you’re wondering about that helicopter. The pilot was spraying crops and swept so low over us that I thought he was going to crash into the car.
Posted by Jackie and Joel Smith at 8:48 PM