The Salmon People and their Story.

A visit to the brand-new $19 million Hibulb Cultural Center, just north of Seattle, is . . .

. . . a journey through the lives and lands of the tribes and bands who’ve become known as the  Tulalip Tribes.

. . .a step into a time when cedar trees towered over the Pacific Northwest landscape – their wood providing shelter, transportation, clothing and tools.

. . . a look at when canoes carried fishermen into Puget Sound waters in search of the salmon; a fish so revered as the main source of food, that today its image in Tribal art stands for “the cycle of life – giving life to the people.” The Tulalip people were known as “the salmon people” because of their proximity to the water. 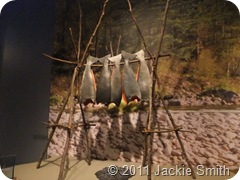 “The salmon, they are not really fish at all; they are salmon people and they live in a village under the sea.”   --Scho-Hallem Stanley G. Jones, Sr. Tribal leader
The Center's name, Hibulb, was the name of the largest Snohomish (tribal) village, located at Preston Point, now the site of Legion Park in Everett, the city immediately to the south of the cultural center.

Using state -of-the-art equipment, interactive exhibits in the 23,000-square-foot Hibulb Cultural Center transport you through cedar groves to the fishing camps, and into a replicated Tulalip Longhouse. (Be sure to watch the short video of song, dance and  the celebrations that took place in this special gathering place.) 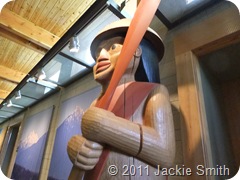 A particularly moving exhibit tells -- through stories and photos -- of the early 1900’s when U.S. government-run boarding schools threatened the Tribes’ cultural history.  The stories are told both English and Lushshootseed, the language of the Tribe,which today is taught in Tribal elementary schools. One Tribal Leader’s story is printed on the wall:

The Canoe Hall, between the Permanent Exhibition Hall and the Longhouse is lined with cases displaying archaeological items that have been donated to the Tribe.

If You Go: Hibulb Cultural Center  is closed on Monday.  Tuesday – Sunday, open 10 a.m. – 5 p.m.  Admission prices vary, check the web site www.hibulbculturalcenter.org for prices and driving directions. It is about 35 miles from downtown Seattle; 50 miles from SeaTac Airport.

Travel Tip:  The Cultural Center is about two miles from the Tulalip Resort and Casino (see Washington Wednesday: Tulalip Treasures, last week’s post). Make it an outing, spend a night at the resort, explore its public art and then visit the Cultural Center.
Posted by Jackie and Joel Smith at 12:21 PM