Winter weather can turn Washington State mountain passes into a white-knuckled-steerwheel-gripping experience, and so can a parade of summer bike enthusiasts who hit the road at the same time as those of us in cars. 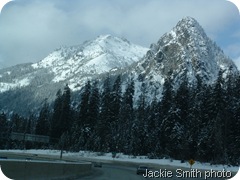 But without ice-slickened roads or those lined with those two-wheel travelers, a trip over the Cascade Mountain range provides travelers with a drive-through window of some of Mother Nature’s most scenic handiwork.

We dealt with the two-wheeled hazards last week on two of Washington State's mountain passes, but still managed to catch glimpses of the beauty of these deep, dense forested peaks that rise between Puget Sound’s wetter western side and the arid Central and Eastern parts of the state. A third mountain pass took us up into the desert-like, sage- and scrub-brush country where Yakima and Kittitas Counties merge.

The trip was a reminder that the journey can be as spectacular as the destination, especially in Washington State where we have some 16 mountain passes.
We drove Interstate 90 from Seattle, a divided multi-lane highway through the mountains, where it reaches its highest point of 3,022-feet (921m) at Snoqualmie (snow-qual-me) Pass. This highway, opened in 1969, follows the route of a 1909 wagon road and is named after the American Indians who lived in the valley to the west.

Snoqualmie Summit is a popular winter ski destination with a public rest stop, eateries, and hotel located there. And last Saturday it was a popular bike route for some skilled riders and others who were very obviously not.
Less than an hour later we headed up Manastash (mah-nash-tash) Ridge on Interstate 82, just outside the university town of Ellensburg. From the Ridge, (elevation 2,672 ft/814m) we had sweeping views out over the Kittitas Valley's agricultural lands.
~~~~~~~~         ~~~~~~~~
Blewett 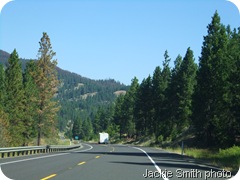 (blew-it) Pass, elevation 4,102-ft. (1250m) took us east from Interstate 90 to the Wenatchee Valley on a beautiful Sunday morning.  This two-lane road with occasional passing lanes and turn-outs, once called Swauk Pass, is named for Edward Blewett, a Seattle mining promoter of the 1880’s.

Its summit is marked by a large vehicle pull-out, there are no commercial outlets. But there once was a time when Blewett was a hub of activity according to some wonderful old photos I found on a blog devoted to its history. (The link takes you to that blog.) 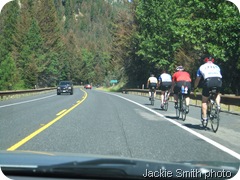 The hub of activity on this past Sunday was a straggling herd of bikers -- some who were pushing our state's 'share the road' philosophy to the near 'braking' point - (yes, a play on words there).

It made for a white-knuckle car trip and I noticed most of the bikers were bent over either looking at the front wheel or monitoring their handlebar mirrors.  Can't imagine they had much more opportunity to enjoy the passing scenery than we did.

The weekend road trip was a reminder that a trip over Washington's many mountain passes should not to be missed -- even by those of us who travel the roads regularly.

If You Go:  Information about each of the state's mountain passes -- including web cam views -- can be found on the state's transportation web site below.  Weather and road conditions, road construction alerts and other travel information is at: www.wsdot.wa.gov/traffic/passes.
Posted by Jackie and Joel Smith at 8:19 AM