We don't take the land tours offered by cruise lines because we prefer to explore on our own.  Sometimes we have a destination in mind and other times we don't.

And often times the most ordinary of experiences make for our most memorable travel treasures.  Such was the case with the Turkish tea and toilets in Trabzon. 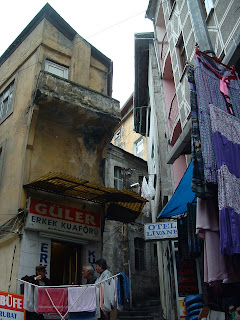 A Trabzon street scene
We realized that on this, our third stop in Turkey during our Black Sea cruise, we had not yet sipped Turkish tea from those fragile looking cups that look like miniature drinking glasses served on  tiny saucers with tiny spoons.  We chose a place that for decades had been selling tea and offering a vast array of those walnut-honey pastries, baklava.

The one thing it didn't offer was a toilet.

Toilets, our waiter said, were across the street about a half block away. And then he led us to them: Down a long hallway and some steps at the back of a banquet hall. He directed Joel to the "Bey" room and then ceremoniously opened and held the bead curtains at the entrance of the "Beyan" room for me.

What happened next makes me laugh now; but at the time it was quite perplexing:
The ladies room was modern with motion-activated lighting in stalls equipped with an eastern-style toilet (think toilet in the floor, a 'squat-pot') which was fine until . . .
I squatted and the light went off.
I stood up, the light came on.
I squatted and the light went off.
I did this three times thinking,"Is this "Candid Camera"?
Finally, I took aim and did what I had to do - in total darkness.

When I came out, our gracious waiter was still there  and again opened the curtains for me.  He escorted us back to the street, shook our hands, thanked us again for having tea.

He returned to his shop while we tucked away another travel treasure.
Posted by Jackie and Joel Smith at 9:03 AM