The temptations, it seemed, were on every street corner, at every ferry dock, bus or tram stop in Turkey and Greece. They were stacked high on tables in the open air or in glass enclosed colorful carts. 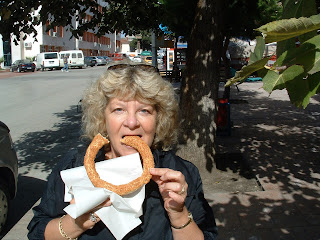 Lunch in Sinop, Turkey
We called them, 'those sesame circles' but the proper name in Turkish is simit and in Greek koulouria. By whatever name, they are some of the tastiest, cheapest street food we have ever eaten. I sometimes ordered by smiling at the vendor then drawing a circle in the air, pointing to the stacks, holding up two fingers for the quantity - I call it the 'point-and-smile' method of ordering in a foreign language.

It took a bit of time to convince ourselves to try them as they looked somewhat plain. I mean, there was nothing fattening to add to them or dunk them in - a practice to which we Americans have become far too accustomed.  Think large bread stick or small loaf of bread twisted into a circle and topped with sesame seeds.

But once we did sample them, we were hooked.  Some were sweet and others more like a cracker with the sesame seed topping providing all the flavor needed.  They made for several inexpensive lunches as we never paid more than .75E or TL (that's euro or Turkish Lira), often paying much less than that. The one I am eating in the photo above was still warm from the oven, as we purchased it at a bakery in Sinop, Turkey during our cruise stop there.

We eat on shore every opportunity we get when on a cruise (we welcome a break from ship's cuisine no matter how good it is).  And half the fun of exploring a new city is trying the new flavors and foods it has to offer even if it means ordering by my 'point and smile' method.
Posted by Jackie and Joel Smith at 7:31 PM