Sevastopol: We're not in Kansas,Toto!

In  Sevastopol, Ukraine, I knew how Dorothy felt after she and her dog, Toto, arrived in the Land of Oz.

We generally consider cruise ports of call to be 'appetizers', giving us enough taste of a place to prompt a return someday. But, this stop -- of less than three hours, in our case -- took Sevastopol off our 'future's' list.

Admittedly, we had but a snapshot of a city on a  rainy, gray day; a setting that gave a spy-movie feel to the place, but that wasn't the only thing. . .

First, on the positive side -- unlike the guarded welcome at Sochi, Russia --we were allowed off the ship here to wander the streets on our own. So we had a chance to explore the town - unlike fellow cruisers who saw  Romanov's Summer Palaces and the Best of the Crimean Riviera on ship-organized tours. 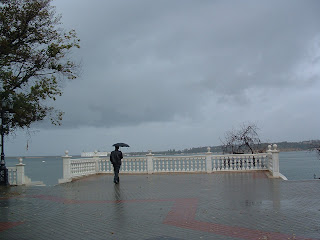 Strolling through the park
Tourism websites describe a Sevastopol that is vastly different from our 'snapshots' which include:
* Sodden streets, empty, but for an occasional pedestrian or two.
* Empty parks - music playing from high mounted speakers in one gave a haunting feel to the empty surroundings.
* Closed stores.
* A handful of elderly women standing on a street corner near the padlocked sprawling market area selling produce from small plastic bags.

Weather conditions and timing of a visit can affect first impressions, but it is the interaction -- or lack of -- with people, that leave lasting impressions  Here, I wondered, were people's souls as empty as the streets?
Although there were people, we had no verbal or non-verbal contact with them. It was if we were invisible. Or maybe they wanted to be invisible?

Our travel fall-back greeting, 'smile-and-nod-if-you-can't-speak-the-language' didn't work.  You have to have eye contact for that. There was no eye contact. There were no smiles.

I tested my invisible theory on those we did encounter:  a family at an espresso machine in the park, a few lone pedestrians, a trio outside a church, a clerk in a deli. . .each time their gaze -- (and in each case they had watched us approach) was quickly averted to someplace off in the horizon just beyond our shoulders.

A War Torn History
When one considers the history here, these folks, and generations before them, really haven't had much to smile about. The Crimean War and its Siege of Sevastopol in the mid-1800's and World War II are local history.  With all the memorials and monuments they've erected, those battles won't soon be forgotten. We saw war memorials (guns are prominent in the designs), statues of war hero's and Lenin, elaborate ironwork fences with designs incorporating the dates: 1941 - 1944. Even the facade of the stately Vladimirsky Cathedral was pockmarked with what appeared to be bullet holes. 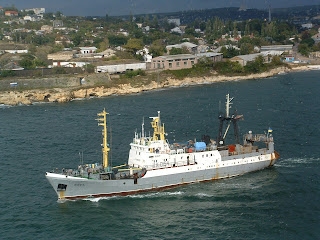 Gun Metal Gray
Even today there is a strong military presence. Our ship anchored in such a manner that our balcony was a viewing stand from which we could watch a passing gunmetal gray military ships . . .we weren't sure if they were Ukrainian or Russian ships.

With the dissolution of the USSR in 1991, both Russia and the Ukraine claimed the Black Sea fleet stationed there. By 1995 they had agreed to divide the fleet between the two countries.  The ownership of Sevastopol continued to be a point of contention and in 1997 Russia dropped any claim to Sevastopol but got 80% of the fleet.

A cruise stop is but a snap-shot of a place - the one we put in our memory book of Sevastopol is gray-toned, well, in fairness with just a splash of color: 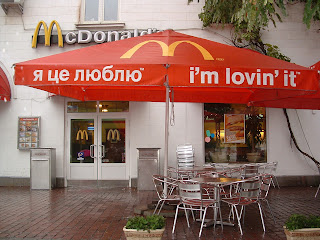 Posted by Jackie and Joel Smith at 9:23 AM