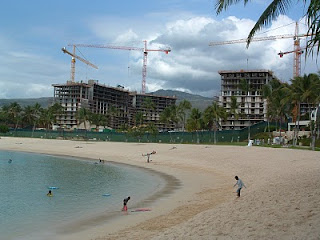 I've focused on the Marriott Vacation Club but want to clarify that Ko Olina is much more than Marriott. Ko Olina Resort and Marina is a multi-project development with free standing vacation homes, full ownership condo's, an 18-hole golf course, a J.W. Marriott Ilihani and a marina. Soon Disney will be opening an enormous 21-acre vacation complex located on the beach between the J.W. and the Marriott Vacation Club.
Last January ground had barely been broken on the Disney facility and this year the structural steel is giving a sneak preview of the resort that will follow. Aulani, 'the place that speaks with deep messages' is not like other Disney properties as it isn't associated with a major theme park. Plans are to open the resort -- with 360 hotel rooms and 481 two-bedroom units like those in other Disney Vacation Club properties -- in the fall of 2011.
Our 'home', Marriott's Ko Olina Beach Club last January had slowed completion of its third building Nai'a; one wing is now open and is where we spent our first week. Talk is that the second wing will open Jan. 2011. Construction on the fourth building is to begin in 2012 with completion slated for 2015.
Posted by Jackie and Joel Smith at 3:15 PM