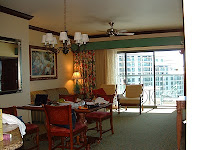 A friend's question, ended as a comment, "You bought a timeshare?"!!
"Well, no. . ." I answered, "We bought a piece of paradise." That's how the salesperson described it. In fact, she said, we had invested our funds in a '401V'. Others invest in 401K's to assure retirement funds and she said our purchase was a mere investment assuring us vacations for as long as we are able to travel.

Among those not familiar with timeshares, the word itself seems to be a bit of hesitation - I know, as we felt the same way before our purchase of one week at Marriott's Ko Olina Beach Club. 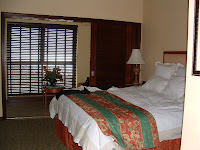 It is a logical solution for this travel-minded couple who have always fantasized about owning a home on a tropical island but who see a vacation home as only doubling the roots and responsibilities; a conflict of interest for we vagabonds. We no longer want to be committed to one destination.

Our purchase is deeded property (some other timeshares are sold using a points/use system); a two-bedroom 'lock-off' unit, meaning we can stay for two-weeks. One week is in a studio unit and the other is in a larger one-bedroom full-size condo type unit. A smart selling point on the part of the Marriott group.

This year we treated it as our second home. We didn't participate in any of the resort's planned activities (think cruise ship sized list of things to keep one occupied). Instead we pretty much lived as we do in Kirkland: prepared meals at home, used the exercise facility, took out garbage and made the beds. Free in-room computer access (another good selling point) and our cell phone allowed us to telecommute as needed.
As owners we received a once-a-week 'tidy' service which provided fresh towels, additional garbage removel and a kitchen tidy. We could have opted for full-blown maid service for an additional cost (those renting units receive maid service much like a hotel).
The 80-degree weather allowed for barbecues in January and the communal, cleaned-daily banks of gas barbecues provided another avenue for social time as we visited with other guests making the most of the outdoor cooking stations.

Grocery shopping -- a task I find most dreary in Kirkland -- was made fun at Don Quijote, just down the road in Waipahu town. This DQ was jam-packed with the same grocery items as found on the mainland but had huge selections of Asian and Hawaiian foods as well. Various types of kim chee, the spicey Korean food became a staple. And even enjoyed our trips to the recently opened Costco in Kapolei town where you can purchase any thing from surfboards,to packaged lau-lau and Aloha shirts.
Posted by Jackie and Joel Smith at 3:47 PM