On a Long, Lonesome Highway: To Stop or Not?

The High Plains Drifters left Jackpot, Nevada in the nippy early morning hours on Day 2 of our winter road trip through the Southwest. It was to be another day of traveling over long, lonesome highways as we crossed this state best known for the glitz and glamour of Las Vegas. 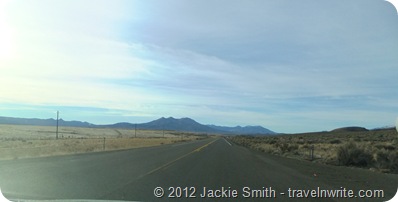 But away from Sin City there’s simply land; lots and lots of land.  One AAA Guidebook says of Nevada road trips, that you will either see miles of nothing or miles of everything – it’s all in your attitude. The first time we drove through the state, I’ll admit I thought it was the most God forsaken place I’d ever seen. . . it’s captured me now – this high desert landscape is lovely and lonesome. 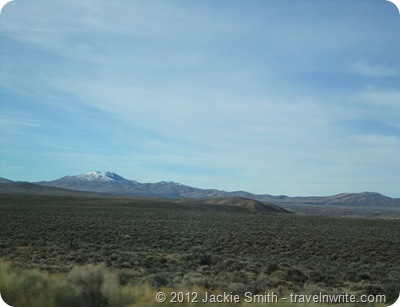 We reached Ely, Nevada (a place deserving of its own post soon) by noon; a short break for lunch and we were back in the car en route to Utah, where we’d spend the night in St. George. 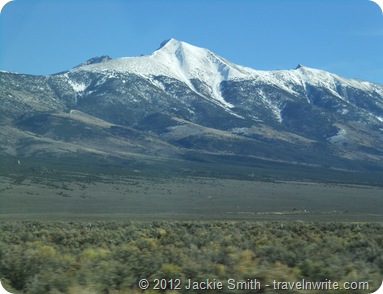 We passed a road sign that warned again picking up hitchhikers because there was a prison out there somewhere in the vast wilderness.  More miles and minutes ticked away and we were entertained by views of Wheeler Peak, 13,032 elevation, pictured above.  Our route looped around this stunning peak (there’s a 12-mile scenic drive that takes you to the 10,000 foot level on the flank of the Peak, which would have been spectacular, I’m sure) but once around the Peak our road again became. . . 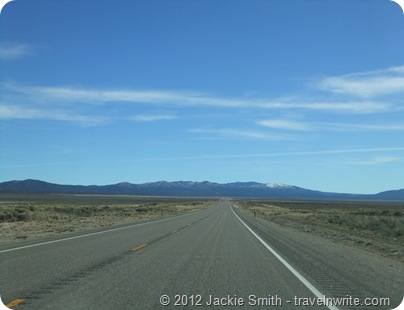 . . .the long ribbon of empty highway. A place so remote that neither  ‘dumb’ or ‘smart’ phones work. They whirl endlessly searching for service.

Joel, after some time and many miles, asked if I could recall the last time we had passed a car. Hmmmm, one, two hours?

He’d no more than asked the question when in the distance we saw a car pulled off to the opposite side of the road.  A man started waving his arm to flag us down, a woman stood by the SUV with its engine hood raised. . . 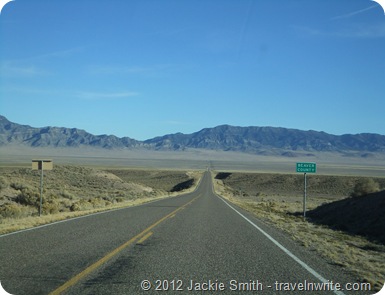 To stop or not to stop?

Joel slowed, crossed the road to where the man was standing but kept our car in gear, foot on the brake.   Turns out this 40-something-year-old couple, who lived in a town a hundred miles away, were on a day’s outing to go ‘prospecting’ in the hills when their car broke down.  They couldn’t call for help – no cell phone service. It was too far to walk.  They’d tried flagging down the  few cars that had passed (obviously long before we arrived) but as the man said, “You know how it is. In this day and age, they don’t stop.”

I can’t tell you how profoundly grateful they were that we had pulled over.

We took all their information (their GPS, by the way, showed them on the wrong highway – luckily our old ‘paper map in the lap’ showed the road we were all on).  It was many miles down the road before we reached a place we could call 9-1-1. The dispatcher assured us he’d ‘get someone right out there’.  We suspect he did!

How sad, that we actually have to think twice about stopping to help someone these days. On this Travel Tip Tuesday, we ask the question:  To stop or not to stop?  What would you have done?
Posted by Jackie and Joel Smith at 8:13 AM