It isn't often that we get to experience ‘how the other half flies’– those front-end-of-the-plane folks who recline in spacious seats behind that curtain enjoying all the treats afforded them there.

We are most-often among those in the cramped economy section  at the back of the plane eating the complementary snack pack of six soy nuts and coffee. . .and earning frequent flier miles.

On our recent trip though The Scout is to be commended for using a pile of those frequent flyer air miles earned in the back of Alaska Airlines planes to get us to Europe in style.

We flew Business Class from Vancouver, B.C. to Amsterdam and back from Venice on KLM, Royal Dutch Airline.

Since it is Travel Tip Tuesday, I thought I’d give you a look what you can get for those frequent flier miles you’ve been accumulating: The luxuries of ‘front-end’ travel begins long before boarding the plane in special lounges in some secluded area of the airport where only those ‘invited’ guests are admitted. The invitation is a Business or First-class boarding pass.

In Amsterdam (picture above) we could have consumed any number of beverages from hard liquor and wine to orange juice and coffee while awaiting our flight.  It was serve-yourself  sandwich makings, a chunky tomato soup, beet root salad and any number of pastries and snacks.

But that was just the prelude to the flight:

We learned from our multi-page printed menu that KLM was in the midst of its Third Annual “From Holland Food and Wine Festival” celebrated on board during October and November. As the name implies, it’s designed to showcase Dutch products, dishes and traditions. (Now why couldn’t other airlines do that? Maybe they do and we just don’t get to see it in the back, right?) 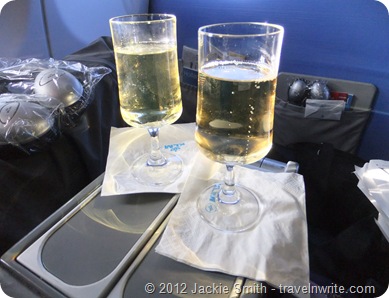 These were the first of several glasses of Billecart- Salmon champagne that I sipped during the near 10 hour flight from Amsterdam to Vancouver. (Okay, so it’s not from Holland, but it is my all-time favorite bubbly; its cost keeps me from having it too often on the ground.) We sipped the bubbly while adjusting our seats - an activity that in itself could keep you entertained for a few hours.
(That M in the circle was to activate the massage feature, by the way.) 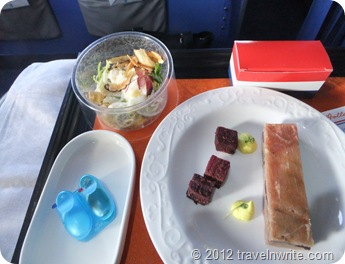 The starter course was “A baton of braised veal enhanced by beetroot with cumin and a Hollandaise piccalilli cream” (the little blue clogs to the left were salt and pepper shakers) and that was followed by: We opted out of the desserts (although I had to try a Belgian chocolate from the box of temptations offered by the flight attendant after dessert). 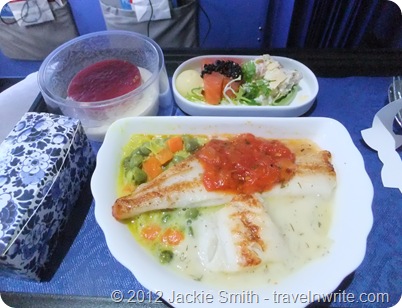 Just before arriving in Vancouver, BC we had our final (oink!) “Light Meal” service: “Eigenheimer potato salad with shrimps served with salmon garnished with herring caviar and trout Hollandaise mousse” in the small dish at the top.

The hot dish is a “Zeeland-fish platter with fillet of plaice and haddock complemented by creamy dill sauce, tomato compote and green marrow peas with onions and carrots.”

In between the eats Joel napped, using  his blanket for an eye shade instead of the one in a kit given us at the start of the flight. It included socks, lotions, lip balm, tooth paste and brush,and ear plugs (mine is the pink bag): 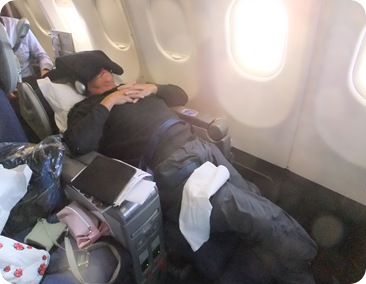 I also reclined but opted to watch one of a dozen movies offered but I also made periodic checks of our position on my individual screen (note, I’d switched to water): By this point in the flight though I was getting excited for the special treat that I had learned on our flight to Amsterdam would be coming. . .KLM – Royal Dutch Airlines has a tradition for ‘front end’ guests. . . you’ll have to tune in later this week to find out what it was that had me so excited.

How we did it: It required 100,000 Alaska Air miles per person to fly from Seattle (via Alaska Air/Horizon) to Vancouver, BC; then Amsterdam on KLM. [We were unable to connect using FF seats to Milan so we booked Easy Jet, Europe’s low-cost airline for that segment – $100 each, with all charges]. We flew Business Class from Venice to Vancouver, B.C.

We paid only a couple hundred dollars in taxes, baggage charges, and fees for tickets that  cost in the $5,000 per person range.

Later this week  I’ll tell you about the treat and Joel will have some tips for booking frequent flier seats. Hope to see you then!
Posted by Jackie and Joel Smith at 6:43 AM