That title means, “Pasta, Potatoes and Bread: Goodbye to our “Diet 2 Go” – at least while in the city’s whose nickname is “la grassa” – the fat.

Diet 2 Go is the eating style we’ve adopted to keep from gaining weight on our travels (or at home for that matter): no bread, no pasta and no potatoes.

Well, for this week anyway, the D2G is on vacation as well.

We have been most pleased with our stay here – in fact have concluded that we could have spent a week and not seen everything. . .or eaten all that one could eat. Bologna is known for its food. Its restaurants. Its markets. Sigh. . .its temptations. Bologna is the birth place of tortellini, those little stuffed pockets of pasta, that as the story goes were created by a short-sighted innkeeper in the 1500’s who wanted them to look like navel of Venus. It also is where tagliette those long narrow noodles were created in 1487, patterned after Lucrezia Borgia’s hair.

Bolognese, the minced meat and tomato based sauce, is named for this town. (And let me make it very clear here: there is no dish called spaghetti bolognese here. . .that was an American invention and it is never ordered here without giving away your nationality!)

Add to that, we arrived in the middle of its Potato Festival. The potatoes grown here are so special they carry the mark of certification: Patata di Bologna D.O.P.   (And the festival, www.patatainbo.it is in its 7th year).

And so it was that we began eating after a trip to the store in the photo above.  But I have to admit, it has been a sinfully fun week at the table and in the kitchen. Let me show you: 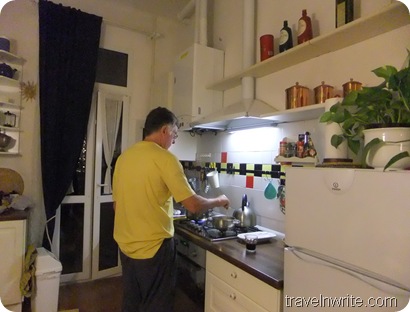 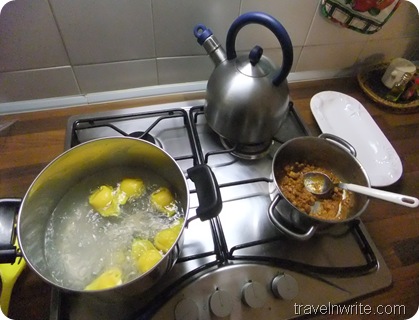 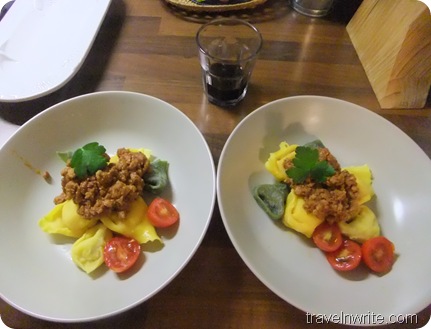