It’s all there. A wealth of Native American history to be had. . . for free.

You simply need to know where to look for it: walls, floors, ceilings. . .it is everywhere 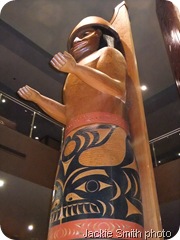 at the Tulalip Resort Casino, just north of Seattle, where art and artifacts tell the story of the Tulalip (pronounced, two-lay-lip), Tribes’ history in the Pacific Northwest.

Today's 4,000 Tulalip tribal members who live on the reservation are descendants of the Snohomish, Snoqualmie, Skykomish and other tribes and bands that signed the Treaty of Point Elliott in 1855.

The Tulalip Tribes in 2008 opened a luxury resort -- 370 guest rooms and 16  suites -- that connects to their expansive Vegas-style casino.  What makes the hotel notable, beyond its ‘luxe’ factor, is its emphasis on Tulalip history and culture – evident everywhere throughout the facility.

The photo above is of one of the three 25-foot high ‘house posts’ that tower over the lobby entrance.  These posts were patterned after th House posts once used as support structures in 'long houses', the Tribes' meeting place. The house post facing the lobby's doorway has upturned, open hands,the traditional sign of welcome. 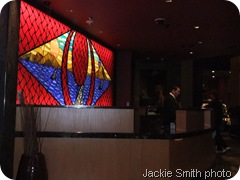 Because of their proximity to water, the Tulalips often refer to themselves as the ‘Whale People” or “Salmon People”.

The mural behind the hotel's registration desk, designed by Native American artist, James Madison, is made up of 1,200 pieces of  glass.  The predominant  red/orange pattern reflects the cedar basket pattern used by weavers who once turned wood from the stately cedar trees into clothing, baskets, fishing nets, ropes and mats. (Click on the photo to enlarge it, if you can’t make out the three whale fins in the water.) 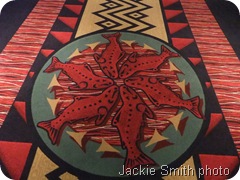 You walk on woven pieces of art in the hallways leading to guest rooms. Carpets tell another part of the Tulalip story. Each design symbol represents Salish art elements, for example, the squiggly red lines along the sides and surrounding the salmon in the center, depict the Puget Sound waters in which the fish are found. The salmon, the symbol of giving life to the people. 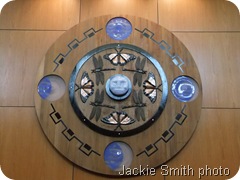 Spinning wool was a part of everyday life and involved use of a loom and stick. A small round whorl acted as the fly-wheel to maintain the momentum of the spindle and was often decorated with art.  Tribute is paid to spinning in a number of large circular art pieces, patterned after the small weaving whorls, and can be found on the hallway walls in the convention center wing of the hotel.
I loved the story this one depicts: the artist remembered being told by his elders when he was a child that when the dragon flies and butterflies come out (in the center) it is time to fish.  The stages of the moon make up the border.

The Tulalips' Tale is too expansive to tell in a single post, so next week's Washington Wednesday will take you just down the road from the resort to the Tribes’ just-opened cultural center.

If You Go: Tulalip Resort Casino is 35 miles north of downtown Seattle, just off I-5, exit 200. It is 50 miles from Sea-Tac airport. There's a direct shuttle to the resort from the airport that runs 11 times a day.
Posted by Jackie and Joel Smith at 12:30 PM