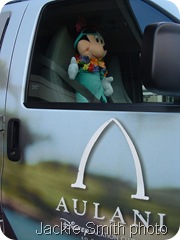 I bet Mickey’s wearing his Aloha shirt and Minnie's dancing the hula today.

And, if this were a movie, it would be titled, "Disney Does Hawaii" because today is opening day at Aulani, the new Disney Resort and Spa at Ko Olina, on the island of O'ahu.

Actually Mickey, that Pint-sized Prince of Happiness, has been hanging out in Ko Olina for several months keeping watch over workers preparing for today's opening.  I snapped this photo of the little fellow last January as he sat in the resort's van.

It's been great fun the past couple of years to watch the construction progress. We only wish we could be there today to be a part of the opening celebration; it is probably one b-i-g Disney extravaganza.

Because our Marriott’s Vacation Club digs are an easy walk and just two lagoons away, we've had plenty of opportunity -- for a few weeks each winter -- to watch and speculate on the neighbor resort's progress. (And thanks to the Disney media folks we had an up-close-inside-the-construction-fence  tour during our stay last January). 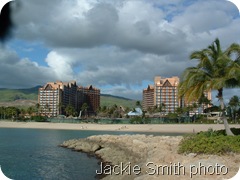 The Disney folks put their team of “Imagineers” (could there be a better job title?)  with local historians, architects and artisans to create a resort that ‘celebrates’ Hawaiian culture.  Activities and resort design and decor reflect all things Hawaiian with just a hint of Disney. 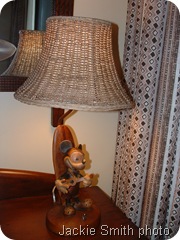 That means that Mickey and Pals, don't have starring roles in this Disney production but they do have a subtle presence as evidenced in the photo to the left of the guest room lamp.

There is no theme park. No rides. No long lines waiting for rides.  But that doesn't mean guests won't have plenty to keep them busy. The 21-acre site features a water playground with pools, slides, a 900-foot water course and lava rocks.  Aunty’s Beach House, their Kid's Club, offers activities, stories and movies for the younger guests, and the 18,000-square-foot spa with 15 treatment rooms and exercise facility will tempt adults.

Even those of us staying down the beach will get to enjoy its two restaurants, AMA AMA  and Makahiki, and, of course, its tropical bars. 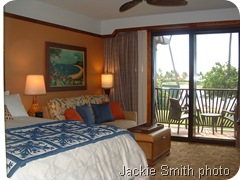 The resort's name, Aulani, traditionally means ‘a messenger of a chief’ – one who delivers a message from a higher authority.

"We want this resort destination to reflect the vibrant culture that surrounds it," says Joe Rohde, Sr. V.P. Creative for Walt Disney Imagineering. "The name 'Aulani' expresses a connection to tradition and deep storytelling - and its roots are in this land right here. As the history and heritage of Hawai'i are the inspiration for Aulani, we are committed to using our skills in design to put guests into these stories."

As I said above, the Imagineers and designers, seem to have gone into over-drive with the subtle blend of Disney and Hawaii.  The photo below is of one of the guest room quilts made in traditional Hawaiian design. Look close.  Do you see that Pint-sized Prince of Happiness? 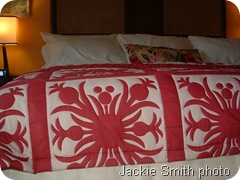 If You Go:  Aulani is in Ko Olina, a development on O'ahu's Leeward Coast (the western side of the island). It's 17 miles from the Honolulu International Airport and about 30-45 minutes from Waikiki. It is about 20 minutes from some of the smaller North Shore surf towns and beaches.
Posted by Jackie and Joel Smith at 9:23 AM