Celebrity’s Oceans Ahead: ‘Save the Waves’

From the shopping list of things to keep passengers entertained on one of our lazy sea days, I chose to attend a presentation called “Carbon Footprint” or some such thing.

And let me make it clear here, I am not some over-zealous environmental advocate. . .I had another reason.

We’d been invited to dine at The Captain’s Table that night and our host was our ship’s Environmental Officer James Mitchell . . .the one doing the presentation.  I decided it would be good to be able to chitchat about , well, carbon footprints. . .the greening of the fleet. . .yes, the environment, by golly!

So off I we 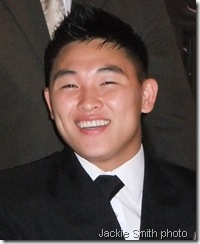 nt, notepad in hand, just in case something might be interesting enough for a post. . .and it wasn’t too long before I couldn’t keep up with all the facts and figures I was hearing.

Not only did I chat about them at dinner, but Joel and I also had coffee with James to continue the discussion a few days later.

A sample of what we’ve learned:

-- In the first three months of 2011 Solstice recycled  163,000 pounds of glass and all proceeds from its sale went to the Crew’s Welfare Fund.

--Water from the faucets on the ship is drinkable and meets EPA standards. . .and it is processed on board from seawater.

--Solar films used on the ship can generate enough energy to run the ship’s central elevators for a 24-hour period.

--There are ice makers that use less water and light bulbs that generate less heat therefore requiring less use of airconditioning. . .things we’d never before noticed. 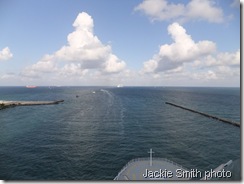 Celebrity’s parent company, Royal Caribbean, began an  Ocean Fund back in 1996 and since its inception has contributed $11 million to support marine science, education and conservation initiatives.

Officer Mitchell, a graduate of the Massachusetts's Maritime Academy, has been in charge of monitoring environmental compliance on the Solstice for two years.

His presentation was part of a series of such lectures given on ships in the Solstice Class fleet as part of the cruise line’s “Celebrity Life” series designed to give passengers a somewhat behind the scenes look at ship operations and sustainability.

(Did we talk about the environment at dinner? Sure did. But the conversations also ranged from  favorite wines and food to travel destinations.)

Note:  I’ve invited James to write a guest post and tell us more about this topic any time he wants.
Posted by Jackie and Joel Smith at 8:13 PM