Bill Kitson: On Vacation from Crime

We thank Bill Kitson, our English crime writer friend, for this report of his trip to Greece last month:

We visited  Athens en route to Crete. Our itinerary was to fly there, spend a couple of days in the capital, before taking the overnight ferry from Piraeus to Chania. That left us with one decision, where to stay? 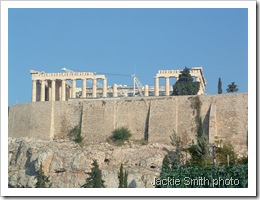 The hotel I’d used in the past was proving more expensive than we were prepared to pay, added to which, the reviews were less than encouraging. After searching the internet (taking Joel’s tip), we settled on the Hotel Kimon, a boutique hotel close to the Plaka and the cathedral, within easy distance of the Acropolis.

One of the disadvantages was the lack of an elevator, but the stairs were quite manageable, even for us oldsters. The reward on climbing them was a comfortable, well appointed room with TV, air conditioning and wi-fi.

Continental breakfast, included in the cost, is served on the roof terrace, where early diners can grab one of the tables with a view of the Acropolis. On hearing I’m an author, the waitress asked for my autograph, saying that she would put it on her wall, next to that of Bono!

The roof terrace is also open in the evening, and although the hotel does not serve evening meals, you might want to take a bottle of wine up there as the capital drifts off to sleep, and sit looking at the magnificent spectacle of the Parthenon bathed in the glow from the floodlights on all sides.
The cathedral is close by, a fact that you should be aware of, as the bells will ring at 7am. No need to pack an alarm clock, though.

There is considerable noise from the large number of motorbikes using the narrow streets of the old town, but I suspect that will be the case wherever you stay. A combination of the lack of space in the streets, and the high price of gasoline has resulted in these being the most popular mode of transport.

Accommodation in a superior double room with 2 occupants at the Kimon Hotel in early May, was  €80 per night (approx. $116) 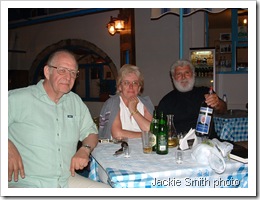 Our flight time for the return journey had been changed, so we left Loutro, the village on Crete’s southern coast (where we met Joel and Jackie last year), a day early and spend a night in Chania on the way to the airport. This enabled us to avoid a very long day’s travelling.

On the advice of our friend Pavlos, (pictured above with Bill and Val Kitson) we’d asked him to book us a room at the Hotel Nefeli, close to the bus station, and directly opposite his cousin’s fish and vegetarian restaurant, reputed to be one of the best in town.

The Nefeli is beautifully appointed, with a high standard of cleanliness and decor. There is an elevator to all floors, rooms have TV, air conditioning, balconies, wired broadband and a mini-bar. The breakfast dining room is on the first floor, and on the ground floor there is a bar and lounge. There is also a roof terrace, but we didn’t venture onto that.

This is five star accommodation at less than five star prices, and having sampled the cousin’s restaurant (His name is George, by the way, which made it tricky, because Pavlos has somewhere in the region of six cousins called George), we can vouch for the quality of the food. Try the salt cod and chips, but only if you’re real hungry.

The old town is within easy walking distance, as is the harbour area, and there’s a superb market close by, where you can buy all manner of herbs, spices, gifts and food of all descriptions.

Accommodation at the Hotel Nefeli in May cost a mere €55 (approx $80) for a double room with 2 occupants. That, we considered to be a bargain.

So what happened to Bill and Val when Iceland’s volcano blew about the same time they were heading home? He’ll tell you in the next post.  Bill’s fourth book is out and the fifth in the Mike Nash detective series is slated for release this fall. It is also Crime Writers Week in England - June 13 - 19. Those of you living there may be lucky enough to see Bill at one of his speaking engagements.
Posted by Jackie and Joel Smith at 6:43 PM