It’s been a month and we are still talking about the guy. 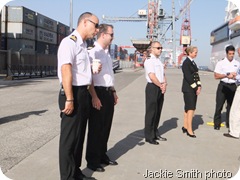 And maybe it is because we liked him so much – although we never really met, beyond a handshake or two, that is; like when he and his top brass welcomed us back from a day in Lisbon.

I am talking about our Solstice cruise ship Master: Captain Gerry Larsson-Fedde, (furthest left in photo).

Larsson-Fedde, a graduate of the Norwegian Naval Academy,  served in the Norwegian Navy, and held officer positions within Royal Caribbean Cruise Line, Celebrity’s parent company, before taking over as Master of the Solstice.

Master is a good way to describe him, as he has mastered the art of being the ship's commander, an obvious inspirational member of the team and having a great since of humor as well.

, I told you he stole the show one night when he rocked out on stage with his guitar? (post: Entertainment with a Capital E!) 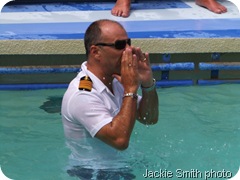 On the last sea day, somewhere in the Mediterranean, he led the crew team in a fast-paced water volleyball game against a team of passengers. When they announced his name the audience went wild as did the ship itself.  Cheers and horn blasts echoed across the water.

This game took place the day after he’d had to show his serious side, when he took charge of a situation on shore in Malaga, getting us all back aboard when the locals decided to pull a ‘work slowdown’ protest of some sort. 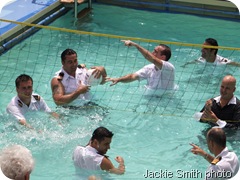 A cruise  ritual we’ve come to enjoy – no matter what the ship -- is the noon announcements usually projected throughout the ship in a rather serious tone, beginning with, “Good day, this is your Captain speaking. . .”  then updates on our location, distance traveled and that left to go, and weather/wind conditions.

At noon on the Solstice, our captain began, “Hi. It is me again. . .” followed by the updates.  But what caused everyone to stop talking and listen each day was his closing quip:

This sampler is best read out loud:
Why are ships referred to as ‘she’?
Day 1: “It takes a strong man to handle her.”  Day 2: “Because when they arrive in port they head to the buoys.”\
Another day: “Man who eat many prunes, get a good run for the money.”
And: “A man who fight with wife all day, get no peace at night.” (Think about it – there was a moment of silence and then a burst of laughter throughout the ship).

When we sail Celebrity again we hope to have Captain Quipster at the helm. . .and the microphone!
Posted by Jackie and Joel Smith at 9:51 AM