So many choices and not enough time to try them all.

That was the only dilemma we had in traveling in Greece without making advance reservations in October. As we got to the end of the month we did find a few places closing for winter, but still we had no difficulty in finding inexpensive -- and always, charming -- accommodations while traveling without set destination or itinerary. 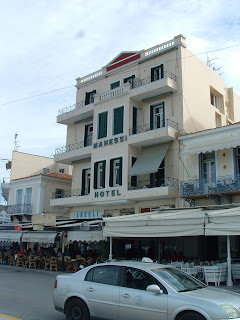 The only place we booked in advance was the Hotel Manessi on this island of Poros because it was our first stop some 24 hours after leaving Seattle. Spontaneity has its place but not after a combo marathon plane, train, bus and ferry trip.  (The four nights we spent here at the end of the trip were booked when we walked up to their front desk.)

While we don't usually make reservations, we do our research by reading books, articles or the Internet (we enjoy the reviews on www.tripadvisor.com) or by simply talking to fellow travelers prior to arriving in a place. Even though we had an idea of what might be available. . .

Selection: A Matter of Serendipity:

Spetses: We'd planned to stay a night or two; we liked the website of a boutique hotel here.  As the ferry approached, we decided the waterfront hotels would be fine. After disembarkation Joel set out towards them, with me at my normal, ten paces behind him.

So I was the one, a man approached, offering a brochure saying, "If you are looking for a place, try mine - Villa Christina - it is only 500 meters up the road."  Although the waterfront hotels were fine, the brochure photos tempted and we set out to take a look at Villa Christina. It was so doggone charming (made more so by a courtyard filled with orange and lemon trees and brilliant bougainvillea blossoms) that we ended up staying there four nights at 35E, or about $50, per night. (We would never have found it on our own.)

Hydra - We had absolutely no plans to go there. Then we'd driven a narrow road through an olive grove late on a Sunday afternoon and ended up at a teeny dock where a small water taxi service operates between the Peloponnese and Hydra. The temptation was too great; we decided on the spot to go there so we certainly had no idea of where we would stay. This was spontaneous travel - even for us!  We asked the lady who'd sold us the taxi ticket for a recommendation. She made a quick call, (in the photo above) reporting that there was a nice place, no water view, available for 35E a night.

When we asked how to find it, she replied, "He will meet you at the dock."  Sure enough, George, the manager, was at the dock to lead us to his Pension Erofili.  The rooms were spacious - we were tempted to stay longer but had a rental car to return so had to put this place on our 'return to' list!

Aegina:  We again had a pension in mind when we arrived but scrapped that idea when  two local men explained that the place we were looking for was on the other side of the island, 45 minutes away by taxi.  So we walked the streets, bags in tow, until we passed a colorful building with the word "Hotel" on its front.  We spent two nights in this renovated neoclassical building built in the 1700's,  and now called  Aeginiti Koarchontiko.  Our rate here was 50E a night which included breakfast - fresh made cakes, cookies, pastries and a hot egg dish made by our hostess.

We've now spent four months of the last two years vagabonding through Greece, successfully using this 'go and find a place' system and will likely continue to do so until we are too old to haul bags around.   And this is what we do:

1.  Travel only in the low or shoulder seasons (early spring or late fall) -- we wouldn't try it in the middle of high season or at Easter or other holiday times when rooms are in demand (rates are also higher then).
2.  Schedule our arrival for weekdays, as there is sometimes less availability on weekends.
3.  Ask to see a room or two (guidebooks recommend this as well) and if we aren't sure about a place we tell them we will give it some thought and may return. This isn't an attempt to get a lower price; sometimes we really don't know if we want Place A until we see Place B.
4. Pack lightly, using small carry-on-sized roller bags and smaller shoulder bags; this wouldn't work with lots of luggage.
5. Ask locals or other travelers to recommend places. We've had some of our best experiences following the advice of others.

Do you travel without reservations? Have you stumbled across a place that we should know about? Use the comment section and let us know.

Photos on this post are the property of Jackie Smith and can be used - only with prior permission.
Posted by Jackie and Joel Smith at 8:44 PM