The Reunion Banquet ~ It Could've Been Worse

It could have been worse; I keep reminding myself when I think back to the banquet.

The Scout and I are back in the Pacific Northwest. As I've written in earlier posts, the trip was prompted by my 51st Class Reunion, a three-day event being co-chaired by me and my long-time friend, Mary, in our hometown, Yakima, Washington.

Events included a Friday evening (hugely popular) no-host Meet and Greet event at Second Street Grill, a local restaurant/bar followed by 'Doin' the Downtown' at local restaurants, tasting rooms and ale house. That evening another gathering of classmates attended our alma mater's Homecoming football game. Saturday morning's highlight was a well-attended tour of the modern complex that has replaced our high school, led by the school principal who had her hair dyed the school colors (times have changed - our principal was bald). The weekend ended with a sendoff gathering at a long-time favorite hamburger joint, Miner's Drive-in, a local icon, that's been around since 1948.

The Marquee Event, however, was the Reunion Banquet. It drew 128 attendees of them, 81 classmates. Many had traveled from far distant points in the United States to be at this Saturday night affair.

We've been preparing for this weekend for nearly three years - COVID gave us an extra year for planning.  And we thought we had it nailed right down to the last detail. But as is so often the case, then reality stepped in:
The Banquet was held at the Red Lion Hotel, a place that once was a centerpiece conference hotel in the city. It shares a parking lot with the city's modern, sprawling Convention Center.  We'd had a similar banquet there for our 45th reunion and returned because of the good food and good service back then.
As the night unfolded, we realized things have changed, and not for the good. And that's when I also started thinking about the Bates Hotel. . . I do that when we have bad experiences at hotels.
Admittedly there are many types of horror, and this tale has no ranking, when compared to serious, life-threatening stuff.  BUT I can tell you that when you've organized an event down to the smallest detail -- the color of the napkins -- and it begins unraveling before your eyes, it is a very real horror.
The Bates Hotel was a fictional location, the setting for the Alfred Hitchcock suspense thriller, Psycho.  The main character, Norman Bates (played by Anthony Perkins) suffered a dissociative disorder and while being the mild-mannered person who ran the hotel, he was also a serial killer.
While we didn't have any Psycho experiences, I reminded myself several times that evening, 'It could be worse, we could be at the Bates Hotel.'

Way back in the planning stages we'd decided to showcase this land of our roots by offering a selection of ales and wines produced in our Yakima Valley wine AVA/hop growing region at our no-host bar for alcoholic beverages.

One of the distinctions of the Yakima Valley is that it is home to more than 17,000 acres of vineyards and growers produce more than half the state's wine grapes. There are more than 90 wineries and tasting rooms scattered about the valley. The reunion seemed a perfect place to drink a glass of local wine.

Not only famous for its wine grapes, but the Yakima Valley is also known for its hop production. Growers here produce 75 percent of the United States hop crop. That has led to the establishment of numerous breweries, ale houses and tap rooms scattered about the city and surrounding areas.

Despite numerous requests to showcase the local brews and wines, the hotel was unable to provide them. Disappointing, but certainly not the end of the world. The hotel representative agreed to offer a selection of wines albeit, mass-produced: a couple of red wines and three whites, Chardonnay, a Pinot Gris, and a Sauvignon Blanc.

If the misspelled and hastily drawn welcome sign hadn't given us a hint of the way the night would go, the malfunctioning cooling system in the banquet room should have; but no, it was checking the no-host bar that we first got a foreshadowing of the direction this banquet would go.

When I asked to see the white 'Sauvignon Blanc', they'd managed to get for us, the bar manager grabbed from the shelf behind her, a bottle of Cabernet Sauvignon, a deep dark red, and proudly showed it to me. Then she said she had added a sweet Moscato to the white wines instead of the dry, crisp wine we'd requested.

So focused on what would go in the glasses, we hadn't thought to confirm we'd have stemware and appropriate beverage glasses.  They must have cleaned out the hotel's bathrooms as they were serving drinks in those small, flimsy plastic glasses, like those wrapped in cellophane and often found on U.S. hotel bathroom counters. And they were charging $9 for each glass.  The story of the mass-produced beers - not ales -- was no better.

The laughter and conversation had raised the decibels of the room, as long-time friends arrived. Classmates greeted each other with hugs. Joyous sounds of shared memories as attendees were seated. We opened the evening with enthusiasm. Food appeared on the banquet table at the time specified in our contract. The event, with a few glitches, appeared to be going well!
The buffet menu we'd selected was a hearty one as we wanted people to fill up on good home-cooked- style food. Chicken, meat loaf (always popular, they told us), spinach salad, green beans, ambrosia salad, mashed potatoes, hot dinner rolls and hot bread pudding for dessert. 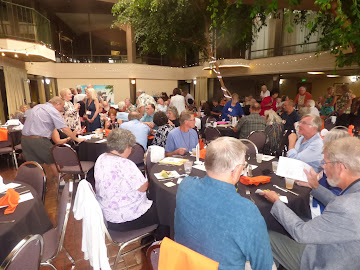 It was the disappearing dinner rolls that started the evening on its slippery slide south. Although at the time we didn't realize it, we had an inkling, when Mary pulled me aside saying, "We are out of rolls. They are baking more."
'Baking more? They aren't heating more, but have started baking more?' I asked. They'd known the final count for a week.  Oh well, we reasoned, guests could go back for hot rolls when they came out.
Then the buffet line quit moving.
"We are out of salad," called out a classmate.
"And we need more meatloaf and chicken," others pointed out.
The bread roll basket remained empty.
The hot bread pudding getting colder by the minute.
It was when - with a third of the room almost finished eating, another third waiting to be called and a third standing in line - that we knew trouble was brewing in the kitchen (coffee certainly wasn't as we ran out of it as well).
As co-chairs, the ones who'd signed that multi-thousand-dollar contract, Mary and I decided it was time to take action:  we had to find food.

So, we through the service door to the kitchen. . .

. . .and found ourselves in an empty room - apparently it is an outer room for the kitchen but no sign of staff or food in sight. (On the positive side, at least Norman wasn't waiting for us there either, I told myself.)
When finally, a staff member emerged from the kitchen, she exclaimed, "You can't be in here! You have to leave! We have the chef is cooking, and the food will come when it is ready!"
And so it did - piecemeal fashion - the rolls and then the meatloaf and then the salad; nothing that allowed the line to move forward.  The straw that broke the proverbial camel's back was when the banquet manager reported they had run out of mashed potatoes! Completely - not a tuber to be found on the premises.

The food fiasco had sent program plans back to the drawing board. Changes made, program shortened, we forged ahead.
The night certainly wasn't going as planned, so I don't know why I was surprised during classmate introductions when a classmate reported having been abducted by aliens shortly after graduation, getting over it and then adding that there could be aliens in the room with us at that very moment.
At that point, I was hoping they were. I would have volunteered to have gone with them!!

The hotel charged us the full contract price. Classmates staying at the hotel reported the room quality matched the quality of the banquet - perhaps, worse.  Our class won't be returning for any future gatherings.
However, the weekend and the reunion were great! I know many of you in conversations with me have expressed that you can't imagine going to a high school reunion (let alone co-chairing one). Let me tell you, when you've reached a 'certain age', you really should take the opportunity to enjoy those long-time friends! The joy of seeing so many  friends and classmates far outweighed the shortcomings of the hotel experience. 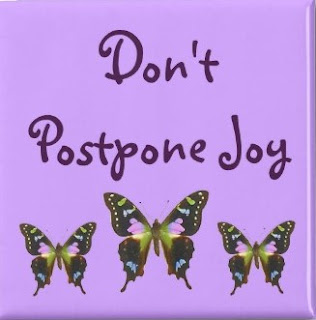 We are coming to the close of our time in Washington State and will soon be heading back to our Stone House on the Hill in Greece.  We've experienced some culture and sticker shock while here and I continue to ponder the question, 'Can you go home again?'  Wishes for safe travels to you and yours. Thanks for your time with us today ~ hope you come back again and bring a friend with you!
Posted by Jackie and Joel Smith at 9:31 AM