Going Home - It is Time

Last Saturday morning as we walked into the village on the shores of Lake Chelan in Central Washington State, I announced I was ready to go home.

Not the one located a few blocks away in the tidy, gated community here where we've planted our part-time roots, but the one on the hill on the other side of the world. In Greece.

We are at the end of our several-weeks-long stay in the US Pacific Northwest. Our visit here has taken us down Memory Lane to class reunions, get-togethers with long-time friends, family, and neighbors, over lunches and dinners. And I've indulged in long 'girl talk' telephone conversations. It has been great, but still, we are ready to go home.

Returning readers know I've been pondering for some time, the question, 'Can you go home again?' I did so in earnest this fall as I returned to the town in which I grew up and graduated from high school. But I think if the truth be told, we expats ponder the question quite often, because at some point in our expat adventures we realize that what was once home starts to feel every bit as foreign as once did the foreign country to which we moved.

Frances Mayes, who divides her home life between her home in America and her home 'Under the Tuscan Sun', has just written an entire book focused on finding the meaning of home. The book is described as one in which she writes of the adventures of moving on while enjoying the comforts of that cornerstone we call, home.  It's definitely going to be required reading for me.

Another of my favorite writers/poets, David Mason, who wrote 'News from the Village', a memoir about his time in Kardamyli as a young adult living next to Patrick Leigh Fermor, now lives in Tasmania. In a recent interview, he also discussed the concept of 'home':
'At the end of one of my early narrative poems, “The Country I Remember,” a character declares, “This is my home because I say it is.” I never felt like someone with a birthright, someone who would inherit a home. I always felt I had to make home wherever I happened to be. In my memoir I wrote that I could never become an expatriate, but fate has taught me otherwise. There is a kind of death in immigrating, a kind of letting go, but that only makes it a profound lesson in the nature of being alive. You let go of so much that you thought was important, only to discover importance in other things. You grow by losing, by paring away. I’ve always felt like a person who carried his household on his back. Now I can set the load down and stay a while. This is my home because I say it is.'

We definitely feel blessed to have two places in the world to call home. Home in this world is in a small village on the 55-mile-long, glacier-fed Lake Chelan. We arrived here in August; a time when temperatures were near 100F/37C and the summer sun was putting finishing touches on ripening grapes and apples, both trademark products of this area.
Apple harvest began last week signaling both autumn's arrival and our departure.
As the days have grown cooler and the leaves have begun turning color, our thoughts have turned to autumn in our other world. It won't be long before the local fishermen start moving their boats from the village harbor and stowing them away for the winter. The olive harvest gets underway the end of October. LitFest, an annual gathering of writers and readers, will soon be taking place in the village down the road. Autumn is one of our favorite seasons in Greece.  It is a fabulous time to visit for those of you contemplating trips.

Again, this visit we've been reminded that some in our American world don't quite grasp our desire to make a world for ourselves so far away.
Their eyes widen - some in wonder and others in horror - when we talk about daily life at our Stone House on the Hill. We often liken it to returning to the world of our childhoods: hanging clothes on the line to dry and our lack of a dishwasher and television there.  Frankly our house is so small in Greece I am not sure where we'd put a television and there is certainly no kitchen space for a dishwasher.
'And you like that?' they ask.
Well, yes, we do, or we wouldn't be going back.
Now that isn't to say we don't enjoy using the clothes dryer and dish washer while in the states, but this new lifestyle has made use of those appliances a treat and not a routine expectation of life as they once were.

A Shrinking, but Expanding World

We enjoy this expanded world of ours - the one with new cultural nuances, language, landscape and the opportunities it offers. Our friends in Greece are now many and I couldn't imagine life without them a part of it. It isn't easy making a new world for oneself, it can be downright daunting, we tell those expat wannabe's who seek our advice.  Leaving routines, comforts of home and friends and family isn't for everyone.
However, we can thank technology, for shrinking the distance between our old world and our current world. My expat friends and I marvel at the ease of staying in touch with those thousands of miles away. We've all found that our friends who want to stay in touch, do so. Talking face-to-face regularly with some friends is easily done using Facebook Messenger or WhatsApp.
The other thing on which we agree is the fact that is impossible to see everyone you'd like to on a given trip back to the States. There simply aren't enough hours in a day or days in a visit to accomplish that.
So now that Covid is no longer preventing or hampering travel and tourism folks are touting all the new routes linking America to Athens, we are telling friends that we won't likely see them all while we are in America, but we have the welcome mat out in Greece. 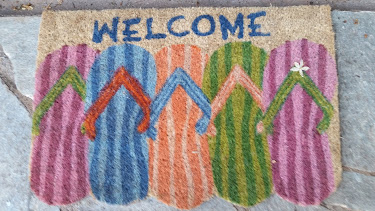 The Airbnb craze has come to our slice of Mani, so we have one next door and another just up the hill, several at the base of the hill are within walking distance of our home. Our friend George offers fabulous studio apartment tourist accommodations that overlook the sea and are only a short walk away.
Our bags are packed, we are ready to go, so we've kicked back to enjoy what remains of our time here. Wishes to you all for safe journeys and happy travels. We'll write again from the other side of 'the pond'! Thanks for the time you've spent with us today~
Posted by Jackie and Joel Smith at 9:28 AM