My post title refers to our expat world; the world of the rural Greek Peloponnese.

It is a world where doctors still make house calls.

And because some of the questions we are most often asked by expat wannabe's, travelers heading this way, and others who are curious about life here concern health care, I thought I'd tell you a bit about it:

I begin with a  Facebook posts by Dr. Anargiros D. Mariolis, --pictured in the photo above  --  about a house call he had made earlier this month. His purpose was to feature the patient, not the fact he had made the house call, by the way.

A different kind of day... grandmother has never visited the Areopoli Health Center and does not receive any medication. Whenever she has asked for help, we have visited her at her own place (on top of a beautiful mountain).
Grandma, I will always be by your side.
You are a modern day heroine of Mani.
Thank you so much because from the steep rock you have been living all these years, teaching life lessons.

The medical facility where he works and the area he serves is about 40 minutes to our south.  It is an area of The Mani that still feels remote and vast. The landscape is harsh and unforgiving; the population scant.  The town of Areopoli where the facility is located is named for the ancient Greek god of war. It was the place the Greek War of Independence began in 1821. Its Health Center is renown for its service.

However, this personal, caring approach to health care isn't limited to this area. We, who live north of here, also have experienced this same personalized approach to caregiving. It is a startling contrast to  the highly computerized, non-personalized world of health care that we knew in the Seattle suburbs. It often reminds us of the American television character, 'Dr. Marcus Welby'  back in the early 1970's. He was that gentle, caring doctor who won viewers hearts, just as real-life health care professionals are winning ours here. 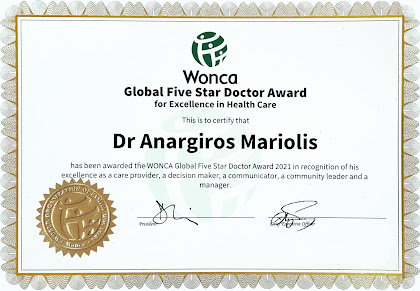 I'd be remiss if I didn't tell you that Dr. Mariolis was recognized last year by WONCA, the World Organization of Family Doctors, an organization of 500,000 family doctors representing some 131 countries. He was awarded  the WONCA Global Five Star Doctor Award in 2021 for 'his excellence as a care provider, a decision maker, a communicator, a community leader and a manager'.

In the Matter of House Calls

One of our favorite 'newbie' stories from our early days at our Stone House on the Hill stems from a visit to our Agios Nikolaos village health clinic 'to check it out'.  All the staff members on duty came to greet us and during the course of introductions they told us to call before coming in, just to make sure the doctor on duty was there as it could be he/she would be out on a house call.  At the time we were dumbstruck at the idea of a doctor really making house calls.

It was during that same visit we asked about how an ambulance would know where to find us should we call needing an urgent response. The receptionist asked where our home was located and after we described it, she told us not to worry: "I drive the ambulance and I know exactly where you are!"

Last year I visited our area's general practitioner, Dr. Sophia (everyone calls her by her first name). She prescribed some medicine and she told me to return the following week. She assured me there would be no charge for the second visit - the first had only been 40 euros ($43US) -- but she cautioned, "Just drop by when you can but call first to make sure I am not out on a house call."

A friend in the village recently had knee replacement surgery in Athens.. It was performed by an orthopedic surgeon who has an office in Kalamata, our area's metropolitan big city, an hour's drive away. In the two weeks that our friend has been home he's had a couple of house calls from his doctor who didn't want him making the trek to the doctor's office.

It isn't just house calls that make 'health care' different, it is the entire system of delivery.  We recently decided to have long overdue colonoscopies done by a gastroenterologist in Kalamata, who'd come highly recommended by expat friends.

We dropped by the doctor's office saying we'd like to schedule appointments (imagine dropping by to schedule something back in the US!) and was told the doctor would call us that evening to discuss them (again, imagine that!). Sure enough, at the appointed 6 pm the doctor called. The appointments were made for two weeks later - no questions about health insurance or payment.

On the appointed day we appeared at the doctor's office where the procedures are performed. We were checked in together (none of that patient privacy stuff here) and as the doctor walked past he quipped in perfect English, "Who is my next victim?"

We then met with him where he explained what the procedure would involve. He had three attendants, two nurses and one anesthesiologist.  Hooked to a heart monitor and given oxygen the procedure took about 20 minutes. Following a 30-minute rest, we -- again together -- met with the doctor to review the findings (photos displayed on his computer screen) as he explained what he had seen.  He explained that he'd removed two polyps from each of us which would be sent to Athens for biopsies.

We received a call at 9 pm (still considered afternoon in Greece) 12 days later to tell us the results were negative.  We still need to go by the office and pick up a copy of the results - as here, the patient keeps those records.

In February The Scout caught a cold . . .or so we thought because two lab administered rapid tests showed negative results for COVID. So, it was off to Dr. Sophia's that we went on that winter morning for a prescription for 'cold medicine'. She first administered a rapid test and he tested positive which prompted her to send us both to the medical lab down the road and for full-blown PCR tests, even though I had no symptoms.  She admonished us to tell the lab to 'go deep' on the test they administered.
After getting the test results we were to call her but if his condition worsened before that we were to call immediately. Her business cards include her mobile number and home number.
Now our village laboratory is a clean, modern facility that adhered to the strictest COVID protocols which meant they came out to the car and administered tests through the open window.  We had been in many times for these tests for travel so were familiar with the technician who came out to greet us.
The Scout said, "We are the Smiths and we need two PCR tests." The technician flashed the big smile for which she is famous and said, "Yes, I knew you were coming - Dr. Sophia just called and she said she had sent you and that I need to 'go deep'!"  She did as she had been told (use your imagination). We tested positive.

Facebook Friends with my doctor and dentist- imagine that?!

Another advantage of living in a small rural area is that you can be friends with your health care professionals.  Both our Dr. Sophia and our dentist, Dr. Joanna, in the village are Facebook friends of mine as they are with dozens of other patients of theirs in the village. Our Dr. Sophia is a leader in the environmental efforts here and it wouldn't be unusual to find ourselves out cleaning a beach with her.

Being FB friends does give another avenue of communication. When scheduling an appointment with Dr. Joanna she first asked for a phone number and then said, 'Oh, never mind, if I need to reach you I'll send a message on Messenger!'

How curiously refreshing to have a health care provider know us as who we are! No longer must we recite birth dates or other identifying numbers when we appear for an appointment.

Health care had been a major consideration when we made the move to Greece. And as with countries everywhere health care varies by region.  We feel particularly lucky to have landed in this area - where doctors still make house calls!

We hope this finds you well and send wishes for safe travels where ever you might be heading. We just returned from an island adventure and that will be the next topic I write about - hope you are back with us and bring a friend or two along!

Posted by Jackie and Joel Smith at 7:40 AM

Email ThisBlogThis!Share to TwitterShare to FacebookShare to Pinterest
Labels: boomer health, Expats in Greece, Greek health care, The stone house on the hill