In Greece: Close Encounters of the Ex Pat Kind

“I want your life” commented a FB friend on a sunset photo I’d posted.
“How do I get your life?” asked another.
“We are coming to visit!” any number of people have told us.

I’ve thought of those comments often the last few weeks – both during those Facebook-photo-moments while soaking up the afternoon sun on the deck AND at other times when having what I’ve termed ‘close encounters of the ex pat kind’. . . the kind that don't make it to my regular updates on Facebook nor have they been discussed -yet - on this blog.

For those of you first time visitors to TravelnWrite, we are part-time ex pats from the Seattle suburbs who’ve bought a slice of rural Greece in its Peloponnese to call our home for a part of each year. Our stone home is nestled at the edge of our small olive grove, not far from a picturesque Greek fishing village. City to country. United States to Greece. This new lifestyle if full of new experiences and encounters.

And since our blog posts have activated the travel bug in so many of you who've been regulars here, that I thought I should, in fairness, tell you about things other than star-gazing and sun-worshipping that make up our ex pat life at The Stone House on the Hill. Take that afternoon shortly after we’d returned this fall. . .

I had decided to rearrange the glassware and cups that share a shelf in our somewhat limited kitchen cupboards. Having cleaned and lined them last spring, I figured this to be about a five minute project. (Stop reading here if you have a delicate stomach and skip to the next tale. . .)

Being my height, it wasn’t until I was tip-toeing on a kitchen chair that I had a full scope view of the shelf and what appeared to be -- in polite terms --  mouse ‘droppings’. [ “Dropping’ = excrement, ca-ca, poo-poo, or worse.]  By whatever word you choose, it was there: a layer of it sprinkled across that new previously spot-less shelf lining of mine.

Enough droppings to indicate it could have been the site of a rodent convention, as a matter of fact. Climbing onto the counter and looking a bit further into the cupboard, I found a hole where the cupboard should have been attached to the stone wall -- the entryway for the little critter (or critters from the looks of it). Thankfully the cups and glassware had been upside down. But still . . . thoughts of those roaming rural rodents had turned my stomach. My few minutes had turned into hours as The Scout was called into action and blocked their entryway and I washed and sterilized the cupboard’s contents and shelves.

We’ve been renovating two garden plots that were home to over-grown aloe vera plants. The two succulents that look much like cacti, had pointed spikes as painful as a cactus. Removing them was like removing small trees. (We moved them to the olive grove where they can grow as large as they want.)

Last spring after the first aloe vera was moved, we’d planted a Greek basil in its place. Greek basil lives year round and can grow to five feet in height.  Its leaves are tiny in comparison to Italian basil. The September storm had knocked our basil to the ground so on a fine fall day we’d purchased and installed some stakes.  I’d buried my face into that delicious pungent smelling herb to get the twine around it and the stakes . . .

As I pulled back I realized I had missed by inches burying my face into the Praying Mantis that had made the plant his home. It was one of my first encounters with the little creature that looks like a small dinosaur or enormous grass hopper, with a triangular head resembling those drawn by animators which depict outer space beings.  This one stared us down and no amount of swiping was convincing him to move. For a bug, their forearms are enormous (they are carnivores and catch and hold their prey). Another close encounter of the ex pat kind. The Scout had to deal with that one.

After my heart quit racing, I thought again about writing this post. BTW, that photo above of a ‘European male’ is courtesy of Wikipedia photos – I chose not to take a close up photo!

What is a post about close encounters if I didn’t mention scorpions. . . we’ve had now three encounters with them. Two alive and one dead but even dead scorpions can spark an instantaneous adrenalin surge. And those little stinkers love our wood pile! We wear gloves now – leather, nice thick leather gloves and use a bit of care when hauling wood or working in the garden. Those cute little pink floral cotton garden gloves of mine are history.

Not all our experiences and encounters have fallen into the 'gross-me-out-genre'.  Many are downright charming and are what we love about this place. Many involve learning the ways things are done in a new culture and a country where life is lived differently than one which one might be familiar.

Take getting our mail for example. We have no street address, and we have no post office box- we don't even have a post office here for that matter -  yet we get mail regularly.  It is delivered to our local taverna of course!

:
The one practice here that we’d become used to on our travels so didn’t strike us as peculiar, leaves many first-time visitors shaking their heads: it is dealing with used toilet paper. Here it is not flushed, it is deposited into small garbage bins next to the toilet. When the little bin is full of the stuff, the bag inside is tied up and taken to the community garbage bins.  We’ve seen this TP disposal method used in other European countries and Mexico and it seems quite normal. For many it is an encounter to remember!

Speaking of garbage, we make regular garbage runs as it isn’t collected at each home as is the practice where we live in the United States. 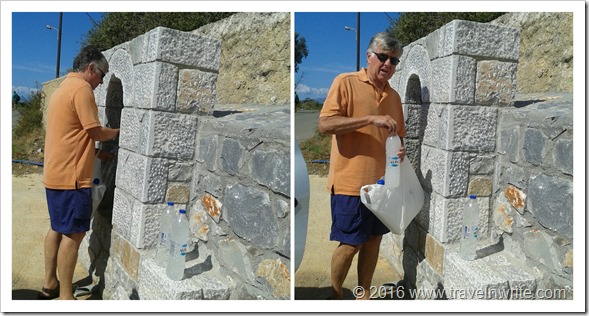 We usually tie the garbage run in with the water run. The drinking water comes from one of many public faucets found along the roadside in the villages below us.  (The water out of the tap is far too 'mineral' tasting (much like Arizona). Should you find yourself a guest at our house you’ll undoubtedly get to experience a water/garbage run first hand! Now, how often when you travel do you get to do that??!!

Thanks so much for being with us as we experience life as part time ex pats in Greece. A special thank you to those who noticed our absence last week and wrote to inquire how we were doing. (We were out of the internet world for a bit). But now back at The Stone House on the Hill for a few more weeks, the adventure continues. We’ll be back next week and hope you will be as well. Until then, thanks for joining us and wishes for safe travels to you and yours~

Posted by Jackie and Joel Smith at 7:25 AM

Email ThisBlogThis!Share to TwitterShare to FacebookShare to Pinterest
Labels: Agios Nikolaos, boomer life, Boomers in Greece, ex pat life in Greece, Expats in Greece, The stone house on the hill