Greece: A taste of wine country

About half way between the Athens airport and our Stone House on the Hill, the freeway slices through the northwest corner of the Peloponnese and its wine country. It’s an area so large that its  Greece’s largest geographical wine appellation. As we have zipped through it on a four-lane divided highway at 120 kilometers an hour we’ve caught glimpses of some of the vineyards that have made this area famous but really had no idea of the beauty to be found just a few kilometers beyond this speedway.

Wine country really needs more than a passing glance from a speeding car, we've said time and time again. Just like the wine produced here, it should be savored, siga, siga, as the Greeks would say. Slowly, slowly.

We decided a couple weeks ago to do just that and spend a night in wine country en route to the Athens airport. We wanted at least a taste of the area that produces some of our favorite wines from Moschofilero (mos-koe-FEE-le-row) white wine grapes and Agiogitik (ah-your-YEE-ti-ko) red wine grapes. Agiogitiko means St. George’s grape and is named for the small St. George’s Church located somewhere within the appellation.

We weren’t headed to any specific winery, although there are more than 40 within the Nemea appellation. We were off to a village named Kefalari, (not to be confused with another village to the south in this same region of the same name, I might add). The population of our destination, Kefalari, was 380 residents back in 1991 and probably a few less than that now. We had a reservation at the Arhontiko Kefalari Guesthouse.

While we’ve had a glorious sunny autumn in the Peloponnese we timed our outing for a cloudy misty weekend. The colors weren’t as vibrant as they would have been under a bright blue sky but the weather muted and softened the landscape and darkened the village adding a bit of a mysterious feel to this short sojourn of ours.

The appellation has three sub-zones and traveling from the flat lands surrounding the town of Nemea where we'd left the freeway, we took the local road that wound its way through tiny villages named Dafni, Kastraki and Asprokampos as we climbed in elevation toward our destination. The growing zones stretch from an elevation of 800 feet above sea level to 2,600 feet (250 – 800 meters).

Past wineries and vineyards we went. At one village we passed a group of hunters congregated in the church parking lot. Dressed in camouflage gear and armed with rifles they were either preparing to set forth or had just gathered after their hunt.  Aside from that group we saw few humans on that early Sunday afternoon.

Wine grape growing in the Nemea region dates back to at least the 5th Century B.C.
Greek mythology tell of the half god Heracles who was sent to Nemea to slay the Nemean lion.  The ancient Greek wine made here, Fliasion, was known as ‘the blood of Heracles’ after that tale. It is a nick-name still used for Nemean red wines.

The village of Kefalari, sits  at an elevation of 770 meters, at the foot of a mountain named Ziria. The mountain is said to be the birthplace of Hermes. Its location is near the Killini Mountain range and Lake Stymphalia; both areas offer outdoor recreational activities. Winter mountain snow activities like snow-shoeing are also popular in the village's alpine-feeling surroundings.


Entertainment here was provided by a herd of sheep crossing the road as we entered the village and an enormous mountain dog watching them.

The village appeared deserted when we arrived. . .as did our guesthouse, which is located just off the main square under the village’s 150-year-old plane tree.

The guesthouse’s front door was locked  but we roused a maid who was cleaning one of its eight rooms.  She summoned the owners daughter, Elena, who spoke English and greeted us warmly.  Our room, for 60-euros a night this season, had a small balcony overlooking the square and an in room fireplace, the wood had been set for us. (It also had modern heating and air conditioning units, an en suite, and wi-fi).

Built back in the 1880’s as a private home for a man who made his fortune selling agricultural products, it was, according to Elena, burned twice by the Germans during the war and then fell into disrepair.  Her family purchased it and after a two-year renovation opened it as a guesthouse in 2007.

We explored the village and had cappuccinos at the nearby Kafenion. It was one of two businesses open, the other was a taverna/cafe a block from the square. Later we returned to the kafenion for a glass of wine. After sunset it seemed to become the gathering place for the village’s men who were watching a soccer game on its small television. They paid little mind to having me, the sole female, among them.

We’d found the village to be charming in the misty afternoon and it turned downright enchanting at night! 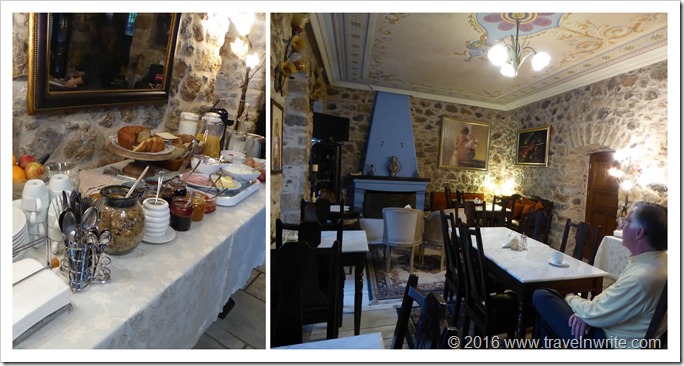 The next morning we stuffed ourselves at the buffet breakfast that included a hot omelet and homemade jams and preserves. The buffet was served in the main lobby/sitting room (included in the room rate). Then it was off to Athens but we will be returning to wine country again and maybe next time we’ll even visit a winery!

Note: Wine tourism in Nemea isn’t what one finds in California, Oregon, and Washington in the United States.  Here the area still has a very country, agricultural feel to it. Many wineries are open by appointment only. But the countryside is beautiful and worth including if you are planning a trip to the Peloponnese.  Consider staying in a small village as we did or Corinth, a larger city only 20 miles/35 kilometers to the northeast; Nafplio is about an hour’s drive to the south.

The owners of the guesthouse we stayed at also have the Armonia Boutique Hotel, a couple blocks from the guesthouse. Information can be found at: www.xenonasarmonia.gr  Room rates there were 106-euros a night.

That’s it from The Stone House on the Hill this week.  We’ve been in a rush to finish some major projects before it is time to pack up and do the ‘Schengen Shuffle’ again – our 90 days tourist visa limit is soon approaching. Again our thanks for the time you spend with us and thanks much for sharing our posts with others! Look forward to being back next week so until then, safe travels to you and yours!

Linking this week with:
Through My Lens
Our World Tuesday
Wordless Wednesday
Travel Photo Thursday –
Photo Friday
Weekend Travel Inspiration
Posted by Jackie and Joel Smith at 5:53 AM