The Greek Stone House on the Hill ~ One Year Later

Here we are in our Stone House on the Hill, this week  celebrating our first year as part time ex pats in Greece.

With most of our major projects completed, we’ve slowed our pace and indulged in blissful, idle hours ~ most of which we’ve spent gazing out over our small terraced olive grove and the view we have up the Mani coastline just beyond it; our own little slice of Greece’s Peloponesse peninsula

Many of you have followed along or been a part of the journey that brought us to this Stone House and you’ve stuck with us as we’ve turned it into our own. Some through the blog and others in real life, real time. Your companionship, encouragement and enthusiasm have been most appreciated.


‘You are never to old to set a new goal or dream a new dream.’

It was back in 2014 when we got serious about focusing that somewhat fleeting daydreaming of ours into an action plan. We - this 60-something duo – decided it was time for a ‘final fling’, a ‘new challenge’, a ‘project’, before we got too old to have one. We’d accumulated many daydreams during our travels but kept coming back to the idea of. . .

Growing Olives Instead of Old 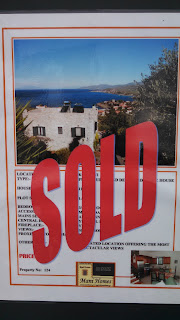 Last December 15th as we sat with the sellers, an array of others, (three attorneys, our realtor and the Notary) in the Notary’s cramped second-floor office in the nearby village, we moved that daydream into reality.
As vivid as if it were yesterday, we recall those pages and pages of documents being read aloud (a legal requirement here) in Greek and translated to English. Then payments (both for the home purchase and costs associated with it) were made and handshakes offered.

The purchase process that had taken months to get in order, was over in less than an hour. . .

. . .then, ‘but, of course’ as they say here, we all – buyers, sellers, realtor and attorney - went to the cafe next door for a drink!

Finally, that Grecian stone and concrete temptress was ours – ten days before Christmas.  We’d  nailed that daydream  - the one that had slipped between our fingers earlier in the year -- and made it reality.

Recalling those first few days, we’ve laughed at what a stark reality we’d purchased. It was rather a bleak stone house, both literally and figuratively. Cold (we ran out of fuel for several days that first stay – both central heat oil and wood), empty (we gave away most of the old well-used furniture and the new hadn’t yet been delivered) and rooms with gray stone accents around white ceiling, walls and floor that didn’t make for a warm and fuzzy feeling. With no television or internet – it also felt a bit lonely. That didn’t deter us from the vision we had for this place. . .


As the days became weeks, and weeks stretched into months the The Stone House on the Hill has evolved into our Stone Home on the Hill. New furniture, paint and decorating touches and a bit of hard labor, by us and others (not to mention two cats who adopted us) made for some remarkable changes even with this part-time life we’ve had here.


Changes in latitudes, changes in attitudes

Just as the house has changed, so have we.  This Greek adventure has moved us from our world, filled with family, friends and the familiar in the United States’ Pacific Northwest, into a dual existence – living two decidedly different lifestyles on opposite sides of the globe.

‘Let’s be honest. Retirement abroad is not for everyone. A totally new environment. Distance from relatives and long-time friends. Culture clashes. Health care issues. Language barriers. But it’s also possible to enjoy a higher standard of living at a lower cost in foreign locations of natural beauty, appealing culture and great charm.’


By living part of the year ‘there’ and part ‘here’ we’ve enriched our lives with new friends; both Greek and other ex pats (from a variety of countries) and have neighbors who are friends as well at both of our homes.

During the months we’ve been in Greece, we’ve developed new daily routines and honed new and forgotten skills. We’ve gotten back in touch with the basics of our childhoods– stringing a clothesline, drying clothes on the line, washing dishes by hand, living without television, putting together the miniscule pieces that come in a box and turning it into shelves or coat racks or other items.

﻿﻿ Little successes are noted with pride; like learning bits and pieces of the Greek language. . .I know the days of the week and can count to six. We can both order wine and say ‘please’ and ‘thank you’. Vocabulary victories occur daily!

Two sets of friends from the Pacific Northwest visited us this fall. We explored areas and eateries, sharing quality, unrushed time together; proving as the old saying goes, that ‘the road to a friend’s house is never long’. . . okay, so the flight is rather long, but you get the idea!

As for ‘distance from long time friends and family’, as Forbes cautioned. . .well, technology has made that simply, nonsense.  Thanks to internet, Skype, Facebook and email, we are able to stay in touch with friends and family. My early 2016 calendar ‘back home’ is filling with social engagements and appointments that have been arranged while I am here in Greece as easily as if I’d been at the computer back there.


The doors we open and close each day decide the lives we live.
- Flora Whittemore
Opening any new chapter in life often means ending or modifying others. Our increased time in Greece required that I resign from a board of directors for a non-profit educational agency on which I had served for 15 years. That was tough.  It also sidelined my freelance writing for a time.
The Scout, who used to focus on the logistics of life (investments and finances among them) as well as finding travel deals from Seattle has had to expand his calculations to international finances, thinking both in dollars and euros. And I’ve written previously of how this base in Europe has given him a whole new candy-shop of travel options to research.

We’ve discovered the joys of village life with its laid-back pace. As we get to know people in the area trips to town take longer as we must stop and visit, or give a quick hello to someone we know. We refer to businesses by the owners name, “Let’s go to Yiannis’ and Eleni’s tonight” . . . “Let’s see if Ellie has fresh calamari” . . .’'We need to stop at Dimitri’s for nails’.


Our pace has slowed here – a stark contrast with life back in the states.

Little did we know when we purchased this home and its 15-tree olive grove how attached we’d become to this agricultural lifestyle. Harvesting our first crop of olives was an unforgettable experience. We are already looking forward to next year’s crop. 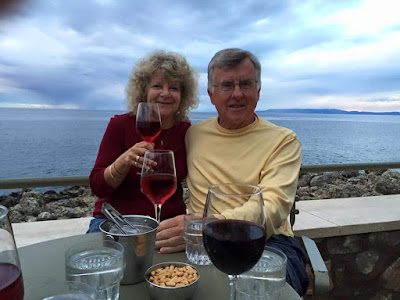 We are looking forward to new adventures in Greece during our second year here and hope you’ll be back regularly to share them with us. We are off to Cairo this coming weekend so will have tales to tell from there as well as more stories from Greece in future weeks. Until then, safe travels to you and yours~
Some of you who’ve signed up to receive these posts in your email seem not to have gotten some of the recent ones, if you could take a minute and reply to this post, saying, “got it” we would appreciate it greatly.
Linking up this week:
Photo Friday
Travel Photo Thursday –
Wordless Wednesday
Our World Tuesday
Mosaic Monday –
Through My Lens