Taking (Another) Bite Out of Greece

I told you that we’d eaten so many wonderful foods while in Greece that I had to tell you about them in a two-part post. Having given you the sampler plate earlier, pull up a chair and prepare for another Greek feast. . .

Coming from the United State’s Pacific Northwest where seafood is plentiful and relatively inexpensive, we’ve not eaten much fish in Greece. We’ve found it to be extremely expensive in comparison to other dishes (the waters, they say, have been somewhat ‘fished out’).

On occasion something comes along that we can’t resist, like this warm octopus salad served to us at a delightful place named, Salt and Sugar, in Poulithro, a small town on the east coast of the Peloponnese:


The chunks of octopus were tender and mixed with onion, capers and sundried tomatoes – and served with a wonderful olive oil and lemon sauce. 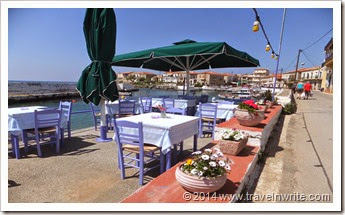 On the west coast of the Peloponnese, we sampled a variety of dishes at this delightful restaurant (pictured on the left) in the harbor town of Agios Nikolaos, (St. Nicholas) where outside tables overlook the harbor.

Among our favorites here were some of the more traditional Greek dishes – many of which are made in such large batches that they aren’t made until tourist season is in full-swing -- dishes like the labor-intensive pasta dish called Patitssio. 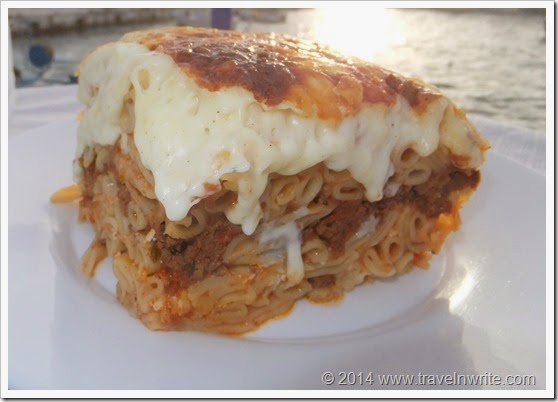 A layered dish a bit like macaroni and and a bit like lasagna, the macaroni-shaped pasta is layered with a red meat sauce and topped with Béchamel sauce. One serving is easily shared between two people.

You might be surprised at how much pasta is served in Greece and how good those dishes are ~ some sources say these Italian-like recipes have been handed down through the generations; having originated here way back while the Venetians occupied so much of this country. 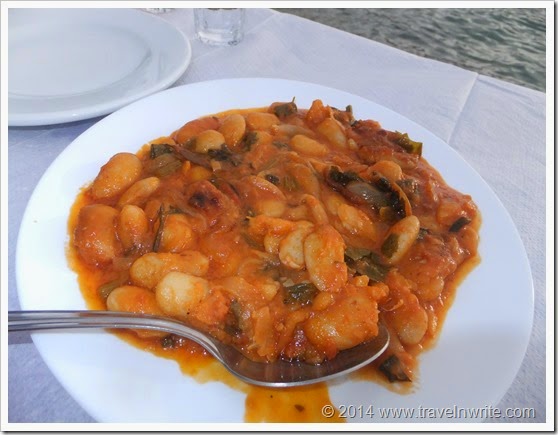 We are in agreement that we each have a ‘peasant palate’ – sometimes the simpler and least expensive the ingredients, the better. Such is the case with slow-cooked flat beans. Simmered for hours in a tomato sauce flavored with fresh herbs this dish is inexpensive and filling enough to be shared by two. 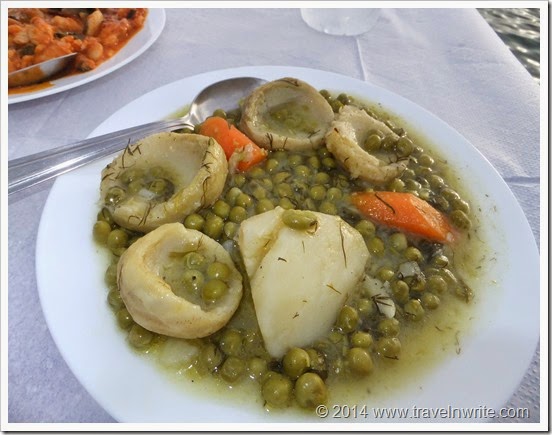 We’ve lucked out on our last two visits and arrived at just about the time the first artichoke harvest of the season. One of our favorite dishes – pictured above -  is artichokes, served in a lemon sauce with peas, potatoes and carrot chunks.  I am happy to report that among our Greek words – good morning, good afternoon and good night – I can now say, “ah-gee-nar-rus” the word for artichoke and if I say it with the right inflection the server knows I am inquiring about the availability of this dish. 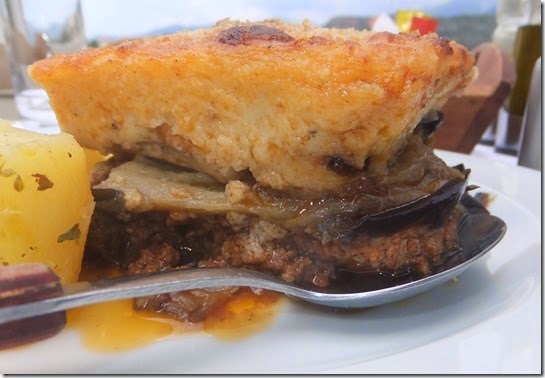 And of course we can’t sing the praises of Greek food and not mention the iconic, moussaka.  This lovely layered dish of aubergines (a much lovelier name used throughout Europe than ‘eggplants’ as we call them in the U.S), potatoes and meat sauce, also topped with a thick Béchamel.  This tasty bit of heaven also came with those lemon/olive oil roasted potatoes on the side. 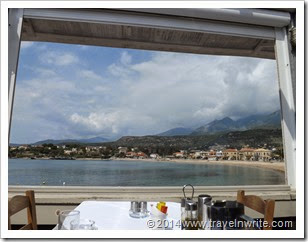 This dish and the one pictured below were eaten at a table with a picture perfect view of the crescent-shaped beach in another small town, Stoupa, in the The Mani area of the Peloponnese.

Stoupa, is just a a few minutes by car from Ag. Nikolaos. With such good eateries in both towns it is difficult to choose where to eat. 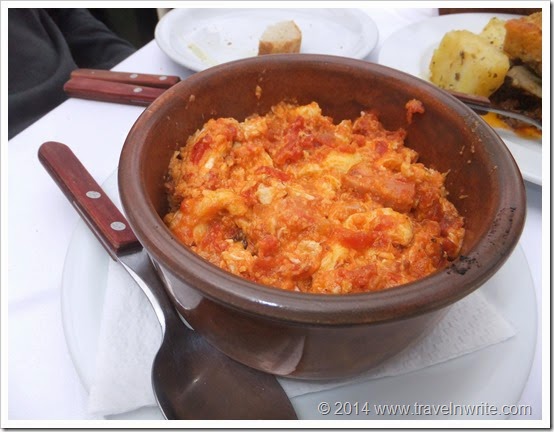 One of the things we like most about Greek food and the restaurants in which they are served is the pace.  The food is served slowly, it is to be eaten slowly and there is never a rush to get you up and out of the place.

You’ll not receive a bill until you ask for one and then – in the smaller cities – you’ll have some treat, a drink, or fruit, or pastry – delivered before that bill as a gesture of thanks for your business. 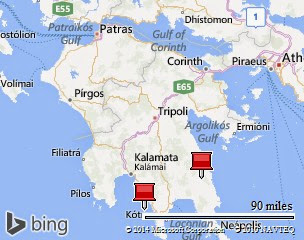 The pin on the right marks Poulithro and the left denotes Ag. Nikolaos and Stoupa.

That’s it for this week’s Foodie Tuesday. Bon appetit to you where ever you are dining this week!
What foods have you eaten in your travels that have left a lasting impression? Tell us about them in the comments below.

Linking up:
Foodie Tuesday at Inside Journeys
Posted by Jackie and Joel Smith at 7:42 AM