From those iconic whitewashed buildings in the Cycladic Islands of Greece we told you about last week, we move south to the southern coast of Crete. The area is laced with hiking trails that wind up stark hillsides and through lush gorges – leading through the island’s ages-old history. 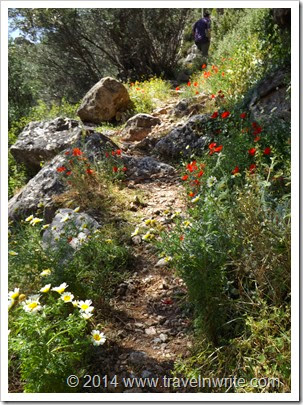 Many of those trails begin or end in Loutro, the small village where we stayed on Crete’s southwestern coast.

Some are what we consider  ‘soft hikes’ – those that don’t require hiking boots or other equipment and could be considered more ‘stroll’ than ‘hike’.

One of our favorite such stroll/hikes snakes along the hill – a backdrop to the village – and leads back more than a century ago; a time of Turkish occupation of this area. . .

The trail in April was lined with spring wildflowers and the hillside carpeted in greens. 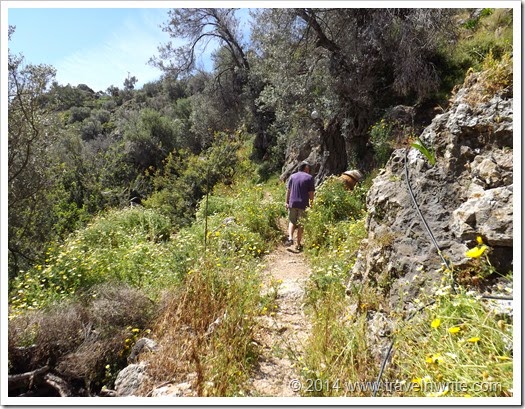 Up, up, up the hillside, we left the village and its crescent-shaped harbor far below. For those in moderately good physical condition – the pathway with an easy grade (a hiking pole would be nice, but not required). Trail markers like those below are posted on rocks and signs along the route.. 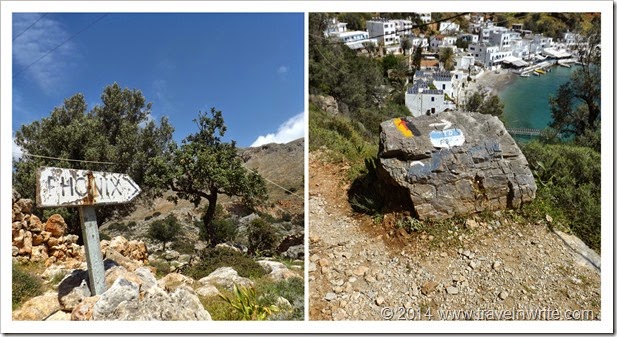 We’ve visited this area three times in recent years and the setting has remained as enchanting as the first time we saw it. 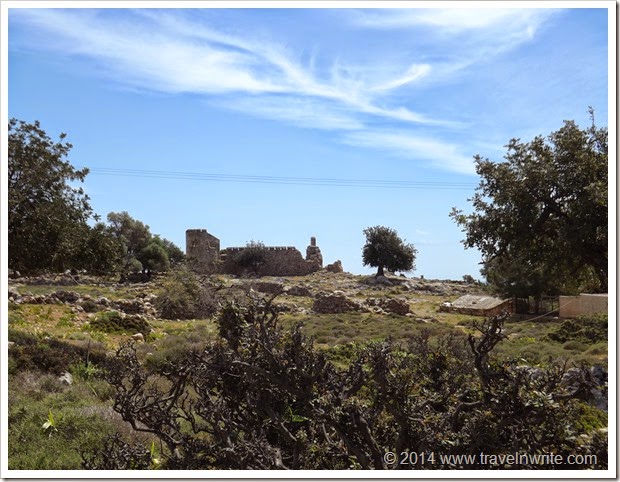 As you crest the hill you step back into a time of Turkish occupation – a time when the koule, or small castle, dominated the hill top. Back then this fortress was probably a hub of activity while nowadays only goats laze and graze among its ruins. 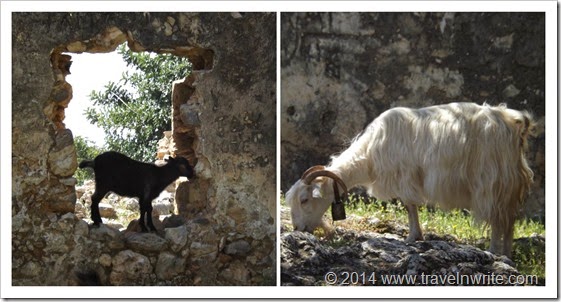 Sometimes we’d pass another hiker or two and we’d nod a greeting – no one wants to break the silence that envelops you here. . . it’s broken only by the hollow clang of the goats’ bells,the buzz of the bees and the rustle of leaves. 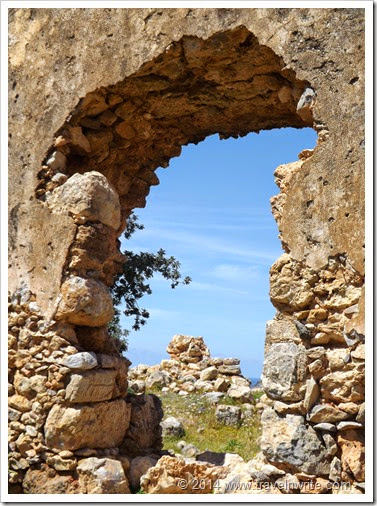 ﻿
The remains of the Turkish koule are unattended – it isn’t a tourist attraction that requires security or entrance fees. Only those who hike between Loutro and Phoenix, as the neighboring harbor is called, are even likely to know it is there. 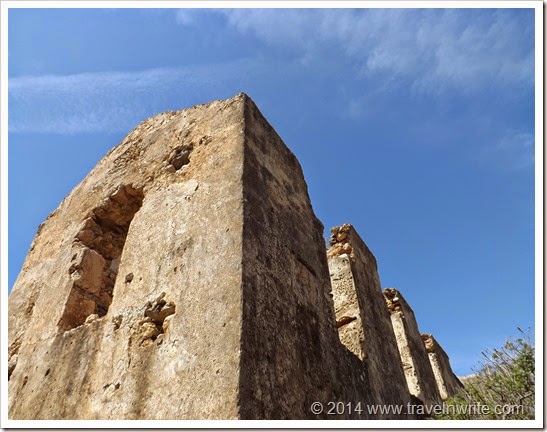 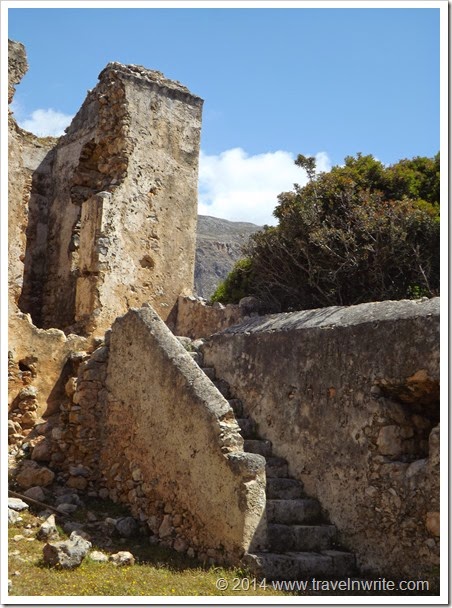 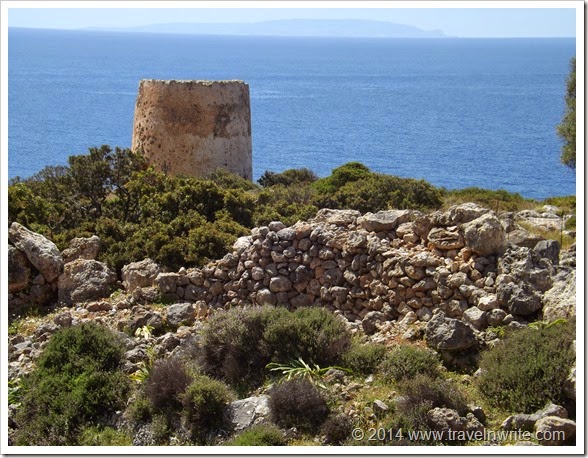 This area was once the base for Saracen pirates who were driven out by the Venetians and later the Turks drove out the Venetians. 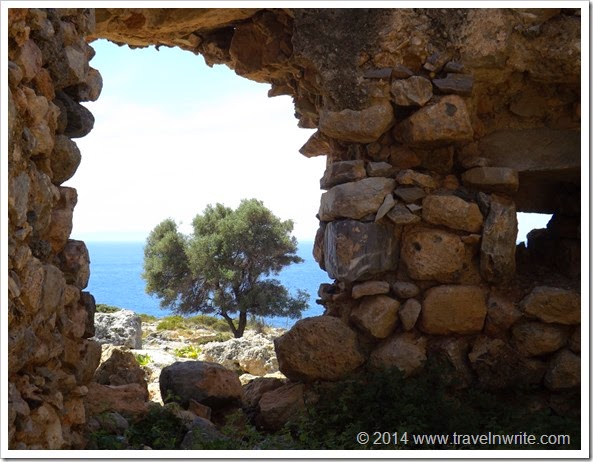 The solitude here is so enveloping that just a short visit can refresh the soul and clear the mind.  I chuckle though each time I see this modern-day addition: a labyrinth. . .I guess it’s for those who need a kick-start in absorbing the solitude. 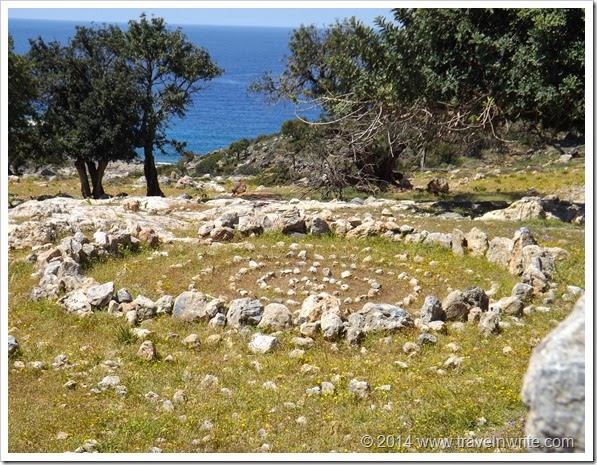 Hope you enjoyed our stroll through history – as always, your time is much appreciated. Hope to see you back here again soon! 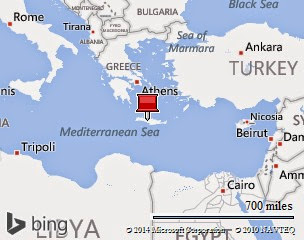 IF YOU GO:  Crete’s northern cities, Heraklion and Chania, have ferry connections to Athens and other Greek ports and airplane connections from Athens and other European airports. Buses, taxis or rental cars could be used to reach the southern shore.  Loutro, however, is accessed only by boat (there is a local ferry) or on foot.

Hiking: The trail we wrote about is part of the European long-distance path, the E4, a network of some 11 long-distance paths that stretch across countries in Western Europe and were developed by the European Ramblers Association (made up of walking groups throughout Europe). In Greece, it stretches across the Peloponnese and then takes up on this island. The Hellenic Federation of Mountaineering and Climbing established and maintains the trails. They also produce a multi-language pamphlet with information about the trails. 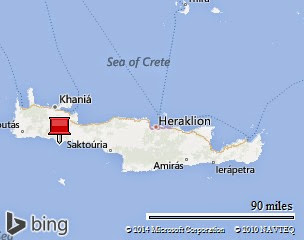