Travel Tip Tuesday: How to Hit a Travel Jackpot. . .

. . .or here are some of our latest tips for saving travel dollars.

Our destination earlier this month was Scottsdale, Arizona. So, why then, did we fly to Las Vegas --some 300 miles and a near five-hour drive away – to get there?

Here is the why and what we did to save some money while extending the trip a few days as well: 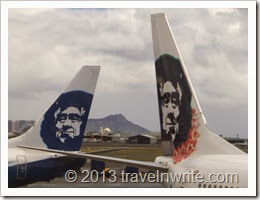 Altered the routing without sacrificing the trip.

The airfare was already significantly less to fly to Las Vegas than to Phoenix when an Alaska Airlines internet promotion offered double airline miles on the Seattle-Vegas route; miles that counted toward frequent-flyer elite status.

Result:  Saved money and earned airline miles by altering our routing.  The mileage assures us that we will be MVP’s in 2014 (which means seat selection advantages, early boarding and best of all, no baggage fees for up to four bags between us!) 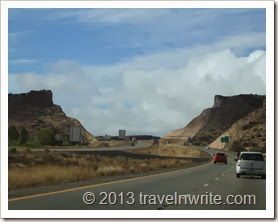 Got more and paid less.

Finding a reasonably priced rental car these days – no matter what the destination – is difficult, especially at Phoenix’s Sky Harbor Airport. By flying into Vegas, we also got a much better car rental price than anything we’d found in Arizona.

The Las Vegas  Fox Rent-a-Car also allowed the addition of a second driver for no additional fee; meaning I could also drive without paying between $140 – $210 extra to do so. Our like-new Toyota Corolla cost $281 for two-weeks. (Upon the return because a computer snafu caused a huge line and much confusion, they refunded $100 of that price as well!) 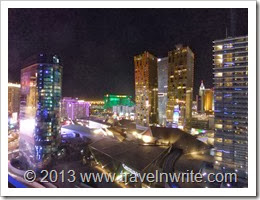 Result:  We had a round-trip scenic drive that took us past Hoover Dam just outside Vegas and then through the picturesque towns of Kingman and Wickenberg, Arizona.

In addition to loving the wide open spaces through which the route took us, we also had an option of spending a couple of nights in Vegas after returning the car. . .a double win, in our book.

So, how many credit cards are too many? 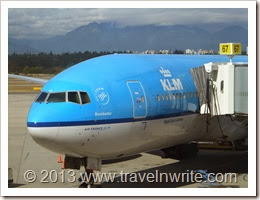 We fly Alaska Airlines almost exclusively and the frequent flier miles earned from this carrier has taken us round-trip to Europe several times on its partner airlines. (Our miles took us round-trip to Amsterdam in Business Class on this KLM flight to the left).

While awaiting our flight back to Seattle last week, we were approached by the “Alaska Airlines credit card man” offering us a signing bonus,you might say, of 25,000 miles, for applying  for the card.


Brushing off his offer, we told him we each already had an Alaska Airlines credit card.  To our surprise, he replied, “That doesn’t matter. . .get another one.  We have people who’ve gotten the maximum – five cards so they can use the companion tickets.”

One of the ways we earn Alaska miles is using their credit card: one mile= $1 in spending.  The other plus of their card is the $99 companion ticket offered each year in exchange for the card’s fee of $75. Those companion tickets come in real handy at times, for example: 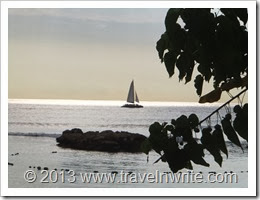 The ticket prices to Honolulu, Hawaii in January are enough to topple a palm tree.

Result:  We both applied for credit cards. We each will receive 25,000 miles (which gets us that much closer to a European flight) and also will have two more companion tickets to use each year.

It has been awhile since I put out a call for tips on travel deals from you.  Have any new tips to share? Add them in the comment section on www.travelnwrite.com or shoot us an email and I will add them in.  And then come back on Thursday when we'll take a hike through the real ‘Old West' !
Posted by Jackie and Joel Smith at 6:59 AM